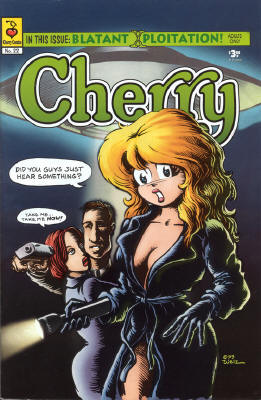 Cherry Comics is an underground comic book created by Larry Welz, starring the titular character, Cherry. The series was originally called Cherry Poptart, the character's full name, but it was renamed due to a lawsuit from Kellogg, claiming a trademark infringement on its "Pop-Tarts" brand. The character's surname remains "Poptart" though, and it's occasionally mentioned in dialogue.

She is a Dumb Blonde who has lots of sex, sometimes in Mundane Fantastic situations, which are often parodies of popular movies, television shows and comic books, particularly Archie Comics, from which Welz derives his style. Welz also collaborates with Mark Bodé, the son of Cheech Wizard creator Vaughn Bodé. Mark draws Cherry in his father's trademark style.

Tropes used in Cherry Comics include:
Retrieved from "https://allthetropes.org/w/index.php?title=Cherry_Comics&oldid=1824299"
Categories:
Cookies help us deliver our services. By using our services, you agree to our use of cookies.