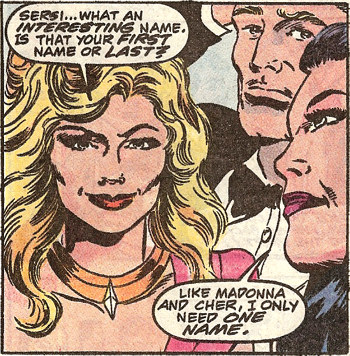 Like all three of the above examples, these are often Names to Run Away From Really Fast

The character or characters go by a single name, with no family/clan/whatever identifier. Unlike No Name Given, it's not that their full name is never made known to the viewer. The full name simply does not exist. Cher is an oft-cited example.

Truth in Television for most of history. Bynames, epithets, and family names were used only when necessary to distinguish between people with the same name. In much of the world, having multiple names (for non-royalty) is a relatively recent invention.

Contrast I Have Many Names. Compare Everyone Calls Him "Barkeep" for an extreme example.

Not to be confused with the similar-sounding First-Name Basis or Only Known by Their Nickname.

Examples of Only One Name include:

Retrieved from "https://allthetropes.org/w/index.php?title=Only_One_Name&oldid=1953550"
Categories:
Cookies help us deliver our services. By using our services, you agree to our use of cookies.