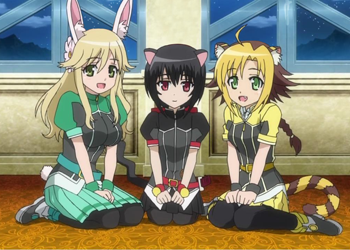 Known in Japan as "kemonomimi" (roughly translating as "animal ears", but not so easy to spell), these are the most dramatically anthropomorphized characters, who appear virtually human, but feature the added characteristics of an animal's ears and tail. A Little Bit Beastly is not furry, and should still have human skin, a human face, a completely human nose, and a human skull and torso structure. Additional features like claws, horns, Animal Eyes, Cute Little Fangs, or the special abilities and/or instincts of that animal, may also be present. In-universe, they display the same mannerisms (including the need to wear clothes) as humans, but are generally considered a distinct species in their own right (demons being common), due to the general Squick of the alternative.

A similar term is "gijinka", similarly anthropomorphized creatures, animals or Mons who are regarded as actual creatures later transformed into humans, retaining only their most prominent features (again, mostly their original ears and tail) and/or special abilities (Mons especially).

This can overlap with Rubber Forehead Aliens, depending on the setting; one of the most common (some would argue overused) ways to invent a fictional race or alien species is to take a non-hominid animal and anthropomorphize it to an extreme, resulting in a virtually human character with a few animal traits, or alternatively, an animal head on a human frame, complete with other human features like a pair of Non-Mammal Mammaries. This is often Hand Waved as an "Alternate Evolutionary Path".

Sometimes referred to as the "ten percent" variety of anthropomorphism, usually to differentiate fans of this type of character from Furry Fandom. See also Cute Monster Girl or Beast Man. Compare Half-Human Hybrid for an actual hybrid between a human and another species.

Examples do not have to be defaultly Little Bit Beastly. They can be normal humans who have been turned into Little Bit Beastly. See also: Kitsune, Our Monsters Are Different, Winged Humanoid, Unusual Ears. For costume ears, see Animal-Eared Headband.

Examples of Little Bit Beastly include:

This Trope is so popular here, we need zoological classification categories:

More than one type

Rabbits, Rodents, and other small mammals

Per Capcom, Scias is actually from the same clan Ursula is from (no matter that Ursula is a Fox Person; perhaps it's a sub-race, or the result of a lot of intermarriage with humans).

Retrieved from "https://allthetropes.org/w/index.php?title=Little_Bit_Beastly&oldid=1967185"
Categories:
Cookies help us deliver our services. By using our services, you agree to our use of cookies.