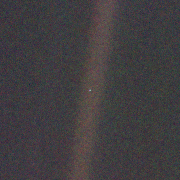 Earth? That old dirtball? Who cares about that boring, useless planet crawling with its clueless lifeforms?

The opposite of Earth Is the Center of the Universe.[1] Seems if not the above, then the main action is set on another civilized planet, and Earth is either radioactive, lost, forgotten, generally meaningless, or outright nonexistent in the work's setting. It's not on any cosmic Evil Overlord's Take Over list, nor is it covered in any Milky Way Geography classes.

Double points for throwing in a Planet of the Apes Ending.

If the people on Earth think they're the center of the universe, but everyone else thinks they are just an Insignificant Little Blue Planet, then you can probably expect some sort of conflict over this or, at least, a few words about how stupid humans are for thinking that way.

See also: Earth-That-Was and A Long Time Ago in a Galaxy Far Far Away. Puny Earthlings usually goes hand-in-hand with this, for obvious reasons. Earth is also no longer the only planet subject to this — compare Pluto Is Expendable.

Can provoke Fridge Logic when aliens who plainly evolved in an environment similar to Earth call it this — as if their homeworlds were any different.

No real life examples, please; it attracts unnecessary discussions (this trope versus Earth Is the Center of the Universe). Take It to the Forums.

Also, no aversions or kinda-sorta subversions here. Take them to Earth Is the Center of the Universe instead.

Retrieved from "https://allthetropes.org/w/index.php?title=Insignificant_Little_Blue_Planet&oldid=1671253"
Categories:
Cookies help us deliver our services. By using our services, you agree to our use of cookies.