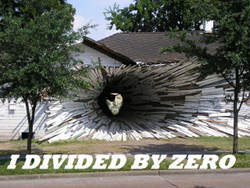 The characters did something so incredibly wrong that reality itself couldn't handle it. Could be the result of a Time Paradox, the result of a Yin-Yang Clash, or an unstoppable force meeting an immovable object, or the risk behind the Forbidden Chekhov's Gun.

To divide a number by zero is the one thing elementary math teachers tell you[1] that you simply cannot do (but as usual, Real Life is more complicated than elementary school; see the Trivia section). It led to a joke on image boards [2] that if someone were to divide a number by zero, it would break reality. Someone making a suggestion that is severely unlikely is often compared to this. When Time Travel is involved, usually results in a Time Crash (and a Fate Worse Than Death for all involved). An Eldritch Abomination is something whose very nature is continuous division by zero itself.

Compare Awesomeness Is Volatile, where Chuck Norris can divide by zero. See also Logic Bomb, which can overlap with this. Not to be confused with The Singularity.

Examples of Divide by Zero include: