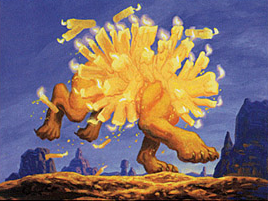 I know we like our tropes to have Wicks, but this is ridiculous.

These are the most unusual, insane and bizarre monsters around—but not because they're Eldritch Abominations. No, they're just "What the heck is that?" weird.

They don't have to be lame or have a Weaksauce Weakness. They just have to be too strange to fit in any of the other categories. In fact, these can be some of the most popular monsters. Can be a result of the work in question going for Attack of the Killer Whatever. Very often a subtrope of Surreal Horror... or at times, Surreal Humor.

Examples of Our Monsters Are Weird include:

Retrieved from "https://allthetropes.org/w/index.php?title=Our_Monsters_Are_Weird&oldid=1904952"
Categories:
Cookies help us deliver our services. By using our services, you agree to our use of cookies.