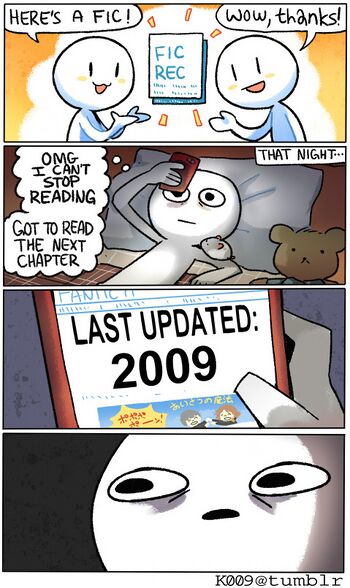 The older this wiki page gets, the worse that message becomes.

A fic whose chapters are spaced with wider updates each time. While this may be the result of a writer working for an overall better product, there is a higher chance of the writer getting derailed by work or personal life. Eventually the fic stops updating, and the reader is left wanting. The death knell comes when, rather than simply coming out with a new chapter, the author just assures the audience they haven't given up. Although the fic in question may update again - sometimes just so the author can state outright that it's a Dead Fic or on Permanent Hiatus. (Or in that matter leaving a note at the end of a chapter and telling what was supposed to happen.)

Granted, this happens all the time. After all, fanfiction is the province of amateurs, and when it's not a living, you have any reason to drop the fic—interests may change, life may take over, et cetera. But the pain implied in "Dead Fic" is a fanfiction that's superbly well-written, that enhances the canon it was based on, that was clearly the work of love and devotion, that is left to dwindle and die.

Some fans also regard these as Dead!WIPs (Works in Progress) or WIPs of Doom since readers are forever left hanging without closure.

Compare Orphaned Series, Cut Short, Left Hanging, Stillborn Serial, Defunct Web Comics. Not to be confused with a Death Fic. Or a Real Person Fic about the Grateful Dead.

Examples -- but be warned, your love is doomed to be unrequited...

(Examples are organized by fandom, not genre, to make it easier to find works that will break your heart.)

Dawn of the Dead

The Land Before Time

The Legend of Zelda

The Lord of the Rings

Mario of any variety

The Melancholy of Haruhi Suzumiya

Phantom of the Opera

Yami to Boushi to Hon no Tabibito

Retrieved from "https://allthetropes.org/w/index.php?title=Dead_Fic&oldid=1949715"
Categories:
Cookies help us deliver our services. By using our services, you agree to our use of cookies.