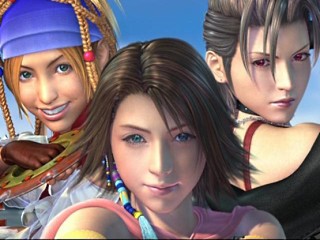 Two years after the confrontation with Sin in Final Fantasy X, the world of Spira has entered a golden era known as the Eternal Calm. Yuna, now free of her obligations as High Summoner, is finally able to get some much-deserved rest. However her own calm barely lasts as her old friend Rikku brings her a movie sphere showing someone who looks and sounds just like "him". Yuna sets out to find more spheres similar to that one, as they may provide clues to whether or not he is still out there. She joins Rikku and stoic newcomer Paine as a member of a "Sphere Hunter" exploration group known as the Gullwings.

Aside from being the first true direct sequel to a main series game in the number-crunchingly popular Final Fantasy series, the game has a less epic, more-down-to-earth tone, focusing on how the world of Spira is coping following the aftermath of Sin. It's a massive switch from the dark and nihilistic tone of Final Fantasy X, featuring Magical Girl-esque Transformation Sequences, heaploads of Fan Service and extremely cosplayable outfits, and peppy J-pop instead of sweeping orchestral scores. In keeping with this, Yuna got a big swing in personality (which is referenced quite a lot) and a new wardrobe to match.

Lost in the controversy over the changes is a fun game that never takes itself seriously or pretends to be anything more than a Fan Service game. The battle system- a fast and fluid refinement of the Active Time Battle system used in previous games- is praised as one of the high points of the game design, and it features the first use of a changeable class system since Final Fantasy Tactics.

Tropes used in Final Fantasy X-2 include:
Retrieved from "https://allthetropes.org/w/index.php?title=Final_Fantasy_X-2&oldid=1725370"
Categories:
Cookies help us deliver our services. By using our services, you agree to our use of cookies.