Everything About Fiction You Never Wanted to Know.
(Redirected from Yu-Gi-Oh (anime))
Jump to navigation Jump to search 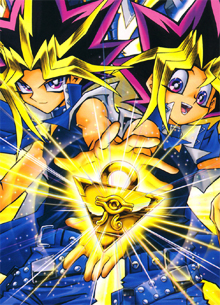 The Pharaoh [left] and Yugi.

Following the manga made by Kazuki Takahashi, there were actually two Yu-Gi-Oh! anime series: The first anime, which covers the first seven volumes of the manga (though with very major changes, including making Kaiba a more frequently recurring villain), which was made by Toei; and this one, the second series, Yu-Gi-Oh: Duel Monsters, was produced by NAS and is adapted from volume 8 onward, rather loosely in some places (and featuring several Filler Arcs).

This second series is probably the reason why you are reading this, since it was the one who made the series popular as it today.

There's a huge amount of video games based on this series, the most famous of which is Yu-Gi-Oh Reshef of Destruction. It spawned a movie called The Pyramid of Light. Yugi and his alter ego return in the Yu-Gi-Oh Tenth Anniversary Movie that teams him up with Juudai and Yusei.

For the card game based on the manga and anime, see Yu-Gi-Oh.

Tropes used in Yu-Gi-Oh! (anime) include:
Retrieved from "https://allthetropes.org/w/index.php?title=Yu-Gi-Oh!_(anime)&oldid=1965585"
Categories:
Cookies help us deliver our services. By using our services, you agree to our use of cookies.