Everything About Fiction You Never Wanted to Know.
(Redirected from Elric of Melnibone)
Jump to navigation Jump to search 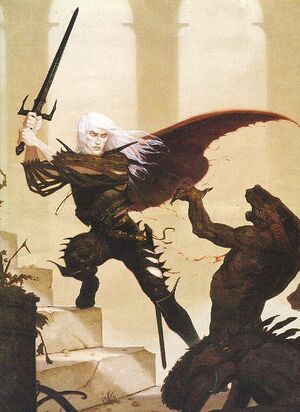 Arioch! Arioch! Blood and Souls for my Lord Arioch!

"It is the colour of a bleached skull, his flesh; and the long hair which flows below his shoulders is milk-white. From the tapering, beautiful head stare two slanting eyes, crimson and moody, and from the loose sleeves of his yellow gown emerge two slender hands, also the colour of bone, resting on each arm of a seat which has been carved from a single, massive ruby."
—The first lines of Elric of Melnibone, Michael Moorcock

"I have this feeling that my luck is none too good
This sword here at my side don't act the way it should
Keeps calling me its master, but I feel like its slave
Hauling me faster and faster to an early, early grave
And it howls! It howls like hell!
I'm told it's my duty to fight against the Law
That wizardry's my trade, and I was born to wade through gore
I just wanna be a lover, not a red-eyed, screaming ghoul


I wish it picked another to be its killing tool"
—"Black Blade", as performed by Blue Öyster Cult

Originally a six book series by Michael Moorcock, the story follows the titular Elric of Melnibone in his journey from a sickly king to a top class warrior and sorcerer involved with the affairs of the gods. His weapon is Stormbringer, one of two evil demonic runeblades that feast upon the souls of those their wielders slay with them, have wills of their own, and tend to take over their wielders on occasion.

The Table Top Role Playing Game Stormbringer is based on these books.

Elric was parodied in the infamous comic book, Cerebus via the character, Elrod of Melvinbone; Elrod looked like Elric (and at least claimed to have a similar back-story), but had the personality and mannerisms of The Foghorn Leghorn.

Note that it has nothing to do with the saga of the Elric Brothers.

The series contains many books and stories, not written in the same order as the internal chronology. Additionally, several of the Elric novels are fix-ups of short stories published years or decades earlier.

Tropes used in The Elric Saga include:

"Farewell, troper. I was a thousand times more evil than thou!"