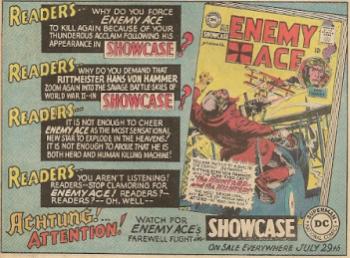 And you support this endeavor by buying his book?!

So there you are, reading a book or playing a game. Within the media, whatever it may be, is some rather illegal and immoral action. Violence, murder, mayhem, general chaos. It's all very enjoyable and so much fun.

So you're reading or playing, and enjoying away, and then suddenly something happens to make you question how right you are to enjoy this socially unacceptable behavior. Perhaps the characters start musing about what kind of warped mindset would possibly enjoy this. Or maybe they just outright smash through the fourth wall and tell you exactly what they think of you.

Or alternatively, maybe what you're watching/reading/playing has some kind of political message—perhaps it deals with famine or suffering in impoverished nations, or the rise of fascism, or some other example of All Humans Are Bastards. And then the same thing happens—the characters basically turn around and tell you that this is all your fault: "You Bastard, why the hell are you enjoying this?!"

And you're left to wonder in shame. Or, more likely, confusion.

This works especially well in video games, in which murder and theft is the generally accepted way to advance, without thought to moral consequences. If done well, it can be thought-provoking and unsettling, giving the reader/viewer/player pause to consider the moral implications of what they may have previously considered just a bit of fun. It may prompt them to examine both their motivations in reading this and the motivations of the hero - who, if they engage in numerous acts that would be condemned if done by anyone else, may look less and less heroic. If done not-so-well, however, it can be quite Narmy and Anvilicious... and also somewhat hypocritical. After all, if the viewer is a bastard for passively enjoying this great evil, then what does that say about the producers, who ultimately when all is said and done are actively exploiting said evil for profit? And aren't other games really to blame for drilling the "everything is a target" and "your orders are absolute" messages into players' heads for 30 years?

No less a luminary than Aristotle disagreed with this trope, proposing that Tragedy exists in order to cleanse the reader of negative emotions in a healthy way. Arguments against the censoring and removal of violence in video games also argue a similar point, their position being that it is ultimately healthier to perform hideously violent acts upon computer pixels within the fictional realm of a video game rather than fulfill the same urges in Real Life.

Related tropes include Karma Meter and Video Game Caring Potential, less antagonistic ways for games to include a moral dimension. Can be caused by What the Hell, Player?. If the character who employs this tactic is a villain (or, at least, is regarded as villainous), it may overlap with Hannibal Lecture.

Not to be confused with You Monster!; nor This Loser Is You, where the Every Man character or Audience Surrogate is a "typical" loser like half the audience is imagined to be; nor with the traditional translation for the Japanese Pronoun "temee"; nor to be confused with the mathematician "You Bastard" from Discworld. Puns aside, this trope is tangentially related to the killing of Kenny on South Park, in that the gag was encouraged by the viewership.

Examples of You Bastard include:

You read the whole thing? How could you?

Retrieved from "https://allthetropes.org/w/index.php?title=You_Bastard&oldid=1927552"
Categories:
Cookies help us deliver our services. By using our services, you agree to our use of cookies.