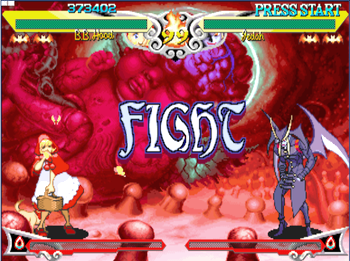 The worst thing that could happen isn't letting that god be born. It's letting the girl win.

Biologically based levels are pretty common, especially in Shoot'Em Up games. However, it's not always enough to explore a Green Hill Zone or enjoy some Jungle Japes - no, sometimes nothing will do but to have the whole level made out of meat.

And such a video game level that takes place inside of a giant creature or otherwise huge organic structure is referred to as a Womb Level. Expect to see lots of blood pools, deadly digestive organs, climbable veins, deadly bone spikes, pulsating hearts, and floors, ceilings, and backdrops made of pink, squishy meat. Lots and lots of living, pulsating meat. Yummy. Mysteriously, things tend to be relatively spacious, well-lit, and full of breathable air.

This is usually because the level is set inside some kind of Enormous Eldritch Abomination of some kind, especially ones that like to swallow characters whole, but sometimes it's just because the level designers felt like it. Also, because giant organs can be creepy, as can the very idea of being inside a living thing. These qualities also make Womb Levels popular candidates for being The Very Definitely Final Dungeon, especially when it doubles as the game setting's Netherworld or Hell.

If the outside of the creature involved is shown, expect it to be Bigger on the Inside. Or maybe you were just shrunk.

The trope gets its name from a set of unfortunate side effects of the games they are in:

If actual biological systems are invoked, expect all laws of anatomy to be cheerfully disregarded.

Another version of this has alien bio-goo subvert and consume some previously normal technological structure. It may also be a Living Ship.

When not dealing with the alien bio-goo, this is similar to a Fantastic Voyage Plot. The usual difference is tone and intent. A Fantastic Voyage Plot is typically voluntary, and involves going into somebody's body to do something to it. A Womb Level rarely provides more than a different ambiance and setting for the same sort of experience that is otherwise typical.

The polar opposite of Eternal Engine.

Examples of Womb Level include:

Retrieved from "https://allthetropes.org/w/index.php?title=Womb_Level&oldid=1968209"
Categories:
Cookies help us deliver our services. By using our services, you agree to our use of cookies.