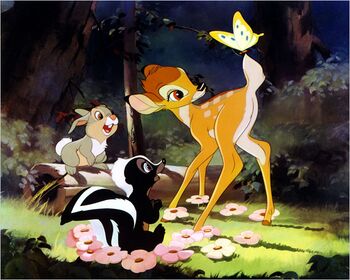 Love is a song that never ends...

Released in 1942, Bambi is the fifth movie in the Disney Animated Canon, based on the novel Bambi, a Life in the Woods by Austrian author Felix Salten.

The movie is a Coming of Age Story that follows the titular character, a young white-tailed deer, from birth to adulthood in the forests of Maine (we think, see below). It is one of Disney's most downright gorgeous films, with art and effects that are still amazing today and mind-blowing for their time. To this day the film holds a solid 91% "Fresh" rating on Rotten Tomatoes. It is said to be Walt Disney's personal favorite of all the films on which he personally worked.

A Direct to Video Midquel, Bambi II, was released in 2006, a whole 64 years after the original. It focuses on the period of Bambi's life immediately following his mother's death. Apparently this was a more interesting story to tell than the book's actual sequel, which had already been adapted by Disney into a comic. (Said comic has long since been out of print and is now a highly sought after collector's item.)

While Bambi II was much better received than typical direct to video fare (to the point where it's actually considered genuinely enjoyable) it barely manages to hold a measly 57% "Rotten" rating on Rotten Tomatoes, a sharp contrast from its precursor which it has inevitably been compared to by critics.

There is a spin off series of books centred around Thumper's family when he was a baby. It's called "Disney Bunnies".

No relation to Bambi and Her Pink Gun and Tokyo Bambi, by the way. Has a short and unauthorized sequel in the infamous Bambi Meets Godzilla.

Tropes used in Bambi (Disney film) include:
Retrieved from "https://allthetropes.org/w/index.php?title=Bambi_(Disney_film)&oldid=1922049"
Categories:
Cookies help us deliver our services. By using our services, you agree to our use of cookies.