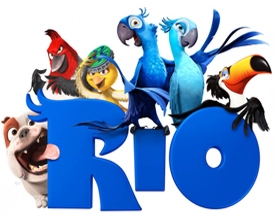 Rio is Blue Sky Studios' sixth film with Twentieth Century Fox, originating from director Carlos Saldanha's inspiration from his native upbringing in Brazil. Released on April 15, 2011 in the U.S., and opened as the #1 movie in its first week.

Blu is a critically endangered Spix's Macaw (referred to as a 'Blue Macaw') who lives as a pet with the owner of a small bookstore in wintry, serene Minnesota. However, after a visit from a veterinarian, Blu finds out that he's one of the last of his kind, and there's a female in South America. He's sent down as part of a captive breeding program, quickly kidnapped along with her by a group of smugglers, gets chained together with her, then they escape and go on an adventure in Rio de Janeiro.

Not to be confused with Rio -Rainbow Gate!-

Tropes used in Rio include:
Retrieved from "https://allthetropes.org/w/index.php?title=Rio&oldid=1827994"
Categories:
Cookies help us deliver our services. By using our services, you agree to our use of cookies.