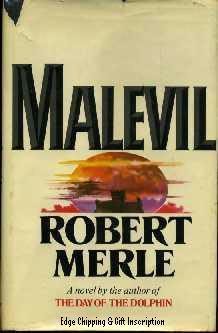 Malevil is a 1972 French Sci Fi novel by Robert Merle.

Emmanuel Comte is a school headmaster turned rancher in the rural village of Malejac, France. He uses his unexpected inheritance from his late uncle to purchase the titular Malevil, a British castle from the Hundred Years' War neighboring his uncle's ranch. Once a tourist attraction, Malevil was condemned after a visitor was killed by falling masonry. The old castle becomes Emmanuel's passion and he spends a sizable time of time and money renovating the property until it's comfortably habitable and operational.

His childhood friends stop by on Easter Sunday, 1977 to discuss local politics turning in their favor and end up tasting wine in the castle cellars.

Now Emmanuel and his friends are picking up the pieces and trying to survive after a nuclear holocaust. They need food, supplies, women, and what's left of the world around them is growing desperate and aggressive. But they have one key advantage: a fortified stronghold that weathered the centuries and the Apocalypse.

Malevil was adapted into a film in 1981.

Tropes used in Malevil include:

"Realizing that your life depends on such absurd coincidences, that's something that makes for modesty".

"The whole world was now nothing but a vast common grave, and I alone was left, with my companions, to live on this charnel ground, to bury the dead and live on forever with the odor".