Everything About Fiction You Never Wanted to Know.
Jump to navigation Jump to search
/wiki/Eminemcreator 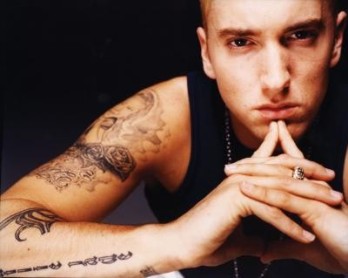 Marshall Bruce Mathers III, AKA Eminem, AKA EMINƎM, AKA Slim Shady (1972-) is a popular rapper from Warren, Michigan.

Mathers had a troubled childhood, raised on welfare by his mother who emotionally and physically abused him. His father walked out on the family when he was a baby. The family switched homes every two months before they settled down. He was bullied to ridiculous extents for being white in an all-black ghetto; once he was even put in a coma and had to re-learn all his basic functions when he woke up. He was often kicked out of his own house for nights, he had failed ninth grade three times, and he could never get a decent paying job, the homes he stayed in were often robbed, and had apparently tried to commit suicide a few times.

During this period, Eminem discovered a love of rap and would practice it as often as he could. His early raps were heavily influenced by the popular gangsta rap of the day, and being white, he was often mocked for even trying, not to mention physically assaulted and shot at.

His first studio album was released in 1996. The album, called Infinite, was not a success; underground rappers and critics alike felt it was a bad imitation of the likes of Nas or Jay Z.

Angry, poor, in a rocky relationship with his wife and with a new baby daughter to feed, Eminem made another EP a few years later--The Slim Shady EP.

This album was remarkably different for his previous style and a new thing to rap in general. The album focused on the Alter Ego of Eminem, 'Slim Shady'. The lyrics were dark and gruesome, but took a twistedly funny approach to subjects such as rape, murder, the occult, drugs, and suicide. The album gained Eminem significant attention in the world of underground hip-hop, and eventually got him signed to Dr. Dre's record label.

Still angry and depressed, Eminem's first true studio album came out in the winter of 1999. The Slim Shady LP was even darker and more demented than his EP, and became a world wide hit. Admit it, even your mom knows the chorus to "My Name Is".

The album also caused riots with parents and Media Watchdogs alike. The homophobic and brutal lyrics started a wave of moral panic, which Eminem pretty much used as an excuse to continue writing such songs.

Marshall's second mainstream album was called The Marshall Mathers LP, and showed the world a more vulnerable and depressed artist trying to deal with his new found super stardom. The album pretty much took everything "offensive" about The Slim Shady LP and turned it Up to Eleven, with Eminem revealing more disturbing details of his childhood, spinning darker fantasies of domestic violence, and responding more virulently to his critics. Considered his magnum opus, the record was another massive hit (it is currently both the fastest-selling and highest-selling rap album of all time) but managed to attract even more controversy than its predecessor.

Eminem's third studio album, The Eminem Show, was less inflammatory and ill than his previous albums. This one was more of an introspect tour of the world of fame and isolation the rapper had built himself. Many of the tracks showed a maturing Mathers, with sadder and more sincere lyrics. The more laid-back style didn't stop it from becoming another hit for the young artist, and like his previous albums, it made it on Rolling Stone's Greatest Albums Of All Time list.

Around the time of recording The Eminem Show, Eminem also appeared in the semi-autobiographical movie Eight Mile and produced its soundtrack. While he hasn't done much acting since, he won an Academy Award for the song "Lose Yourself". (He didn't go to the ceremony, preferring to sleep instead.)

During the summer of 2004, Eminem released his fourth studio album, named Encore. Critics sung their usual praise, but many fans felt the album was a disappointment--Eminem's famous tongue-twister lyrics were dumbed down to much simpler mumbles, the beats felt less creative and worked on, and much of the songs seemed an excuse to fit in as many fart jokes as humanly possible. (Eminem went on to say years later that he made the album during an addiction to prescription drugs that nearly took his life, which explains some things.) Another commercial hit for Marshall, but many fans shove it right into Seasonal Rot territory.

After Encore he took a break from music (aside from Curtain Call: The Hits, which had a couple of new songs on it, and The Re-Up, a mixtape-style album that attempted to showcase the artists on Shady Records) to deal with his own personal drug problems and the shooting of his best friend Proof.

In the Spring of 2009, Relapse was released, sending Eminem back into ‘Slim Shady’ territory, detailing his descent into drug addiction during his hiatus. While the album received generally positive reviews and was seen as an improvement over Encore, some felt that the accents, celebrity bashes and outright morbid weirdness of some of the tracks were a little much (interesting, Eminem seems to agree with the detractors, calling the album "Ehh" during "Not Afraid"). However, it was yet another financial smash, securing Eminem as the best-selling rapper of all time. A special edition of the album, titled Relapse: Refill, was released in December of the same year and included seven new songs.

His next album was set to be a direct Sequel to Relapse, but as he tinkered with it, the whole Relapse 2 idea was dropped in favor of a completely new album titled Recovery, which promised to be a return to the more sincere and somber tone of The Marshall Mathers LP and focus less on Slim Shady's antics (That album, named The Marshall Mathers LP 2, was released on November 5, 2013). The first single from the album, "Not Afraid", was released on April 29th, 2010, and the album was released on June 22nd of the same year. While some listeners felt that it was just more of the same, reception was for the most part positive, with many hailing it as a vast improvement over both Encore and Relapse. And like all of his albums, it was greeted with very strong sales.