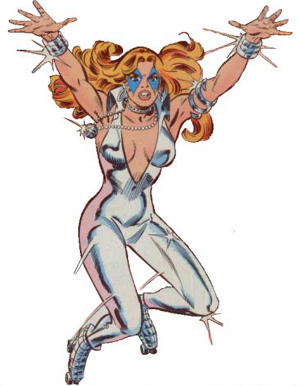 A character is created as a direct response to an idea or fad that is currently popular. Naturally, this character might prove schlocky or out of place once that fad passes out of pop culture, unless some writer is willing to take the character out of obscurity and build him or her up into something more.

Villains who are Fad Supers have a higher chance of being kept, since they are usually intended to be eccentric, out of place, and theme-based.

This isn't the same as an existing hero's ability or story being tweaked in response to the times, such as Silver Age technobabble revisionism. Compare with Totally Radical, We're Still Relevant, Dammit!, and Captain Ethnic, contrast with Old Superhero, who is outdated on purpose. Particularly prone to being the subject of Reimagining the Artifact if brought back.

Examples of Fad Super include:
Retrieved from "https://allthetropes.org/w/index.php?title=Fad_Super&oldid=1558358"
Categories:
Cookies help us deliver our services. By using our services, you agree to our use of cookies.