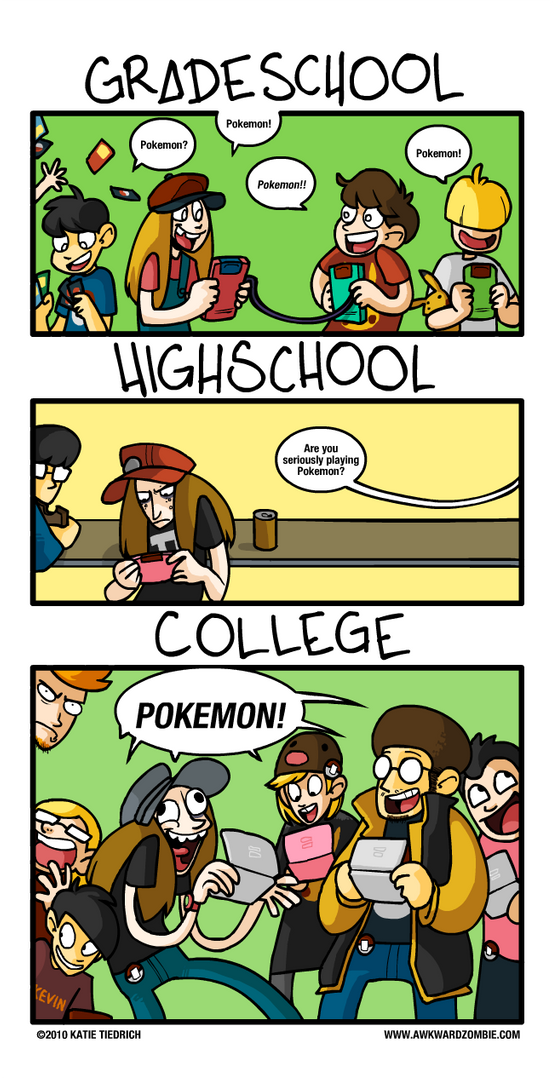 It's a fact of life that something which portrays itself as "cutting-edge" is eventually going to become mainstream, and from there passé. However, given enough time—usually about 20 years—what had been seen as behind the times, old hat, or just plain uncool suddenly begins to make a comeback. It's gone through the ups and downs of the Popularity Polynomial.

How often the item cycles back and forth between "cool" and "not cool" depends on many factors. If something reached a peak when you and your friends were kids, then when you become teens, it is a reminder of a childish time—and as the fear of childishness and the desire to be very grown up kick in, you don't want to think about it. But when you become adults again, it is seen as harmless. And once your kids discover it, it may even become cool again (as long as they don't associate it with their uncool parents). Now apply that on a larger scale.

Given enough cycles, it becomes an equivalent of Cyclic Trope for shows.

The name comes from the fact that we like alliteration. Here's also a more detailed explanation about what a polynomial is and what it has to do with the ups and downs of popularity.

A polynomial in x is a sum of non-negative powers of x which are each multiplied by a real number. You might know some simple polynomials: y=ax+b, the equation for a straight line where a is the slope and b is the y-intercept, is a polynomial (it can be written as: y=a(x^1)+b(x^0)). That's called a polynomial of degree 1, because the highest power of x that appears is 1. A polynomial of degree 2 (y=a(x^2)+bx+c) is called a parabola, and if you plot its graph it looks like a dish (which could be wide or narrow, or turned upside down, depending on what a, b, and c are).

Of course, there are polynomials of a higher degree than that, like y=4(x^5)+8(x^4)+15(x^3)+16(x^2)+23(X^1)+42, which is of degree 5. Higher degree polynomials can create all sorts of curves when you plot them. Apart from the line and the parabola, you can get a lot of shapes, such as a lot of hairpin curves or a roller-coaster shape that goes on for a while before diving up or diving down.

So basically, in a polynomial in x of a high-degree you can expect y to go up and down as x grows.[1] The trope name is about looking at the popularity of something as a polynomial in time: as time progresses, it becomes less popular, then more popular, then less popular again, and so on and so forth. Generally speaking, the higher degree the polynomial, the more times you switch from "cool" to "stupid" and back. The points where the popularity rises, flatlines, and then begins to decline are known as the polynomial's Jumping the Shark moments, and when it does the opposite- reverses a decline and starts to climb- rigorous mathematical notation is that it is Growing the Beard. Some fringe lunacy groups insist on an alternative terminology having to do with derivative signs and whatnot, but they can be safely ignored.

So if you were wondering what a polynomial was, now you know.

See also Colbert Bump (a resurgence triggered by a specific factor), Dead Artists Are Better (when a person's death rehabilitates his or her reputation), Cyclic Trope (when this happens to tropes) and Discredited Meme. Compare with Two Decades Behind, Career Resurrection, Nostalgia Filter and Vindicated by History. Contrast with Deader Than Disco.

Examples of Popularity Polynomial include:

The genre returned in a big way in the late '90s/early 2000s with Who Wants to Be a Millionaire? and The Weakest Link, as well as shows like Greed and the Revival of Hollywood Squares. This boom also caused a deluge of their assorted clones. In the early 2000s, Millionaire and Link pulled in tens of millions of viewers and were watercooler discussion fodder, and their hosts (Regis Philbin and Anne Robinson, respectively) were household names. Then their networks began marketing them to death (ABC aired Millionaire almost every night of the week), and reality shows like Survivor, American Idol and The Amazing Race started taking off and providing what were then innovative alternatives to the traditional quiz show model. Almost overnight, the shows were only surviving in syndication—and even that wasn't enough to keep Link alive. To this day, their catch phrases ("Is that your final answer?" for Millionaire; "You are the weakest link. Goodbye!" for Link) are considered annoying as all hell.

Then in 1957, the Brooklyn Dodgers and New York Giants [3] moved to, respectively, Los Angeles and San Francisco, starting a trend for other teams looking to build new stadiums, which resulted in the sport's expansion beyond the East Coast and the Midwest. This was followed by the collapse of the long-running Yankees dynasty in The Sixties, meaning that fans of other franchises now had a chance to see their teams win the World Series. Suddenly, baseball was relevant again, and in a position to put up a real fight against football for the rest of the century.
Of course, New York sportswriters are still likely to remember The Fifties as baseball's "golden age", simply because it was the era in which the Yankees got the World Series rings they were entitled to, dammit! And if the Yankees didn't win, then the Dodgers or the Giants probably did.

While it would seem that facial hair is about due for a comeback any decade now, there is good reason to believe that mainstream facial hair is out for good given the societal and cultural changes that have occurred in the past hundred years. Interpersonal and people skills are now more important than sheer strength and virility (of which facial hair is seen as being indicative of) in leaders, and studies show that on average men with facial hair are seen as less trustworthy, especially to women, whose cooperation and input actually matter now that we are finally evolving away from a patriarchal society to one in which the genders are equal. In short: appearing trustworthy to both men and women is now much more valuable than intimidating other men, so beards aren't expected to make a comeback anymore.

Retrieved from "https://allthetropes.org/w/index.php?title=Popularity_Polynomial&oldid=1784057"
Categories:
Cookies help us deliver our services. By using our services, you agree to our use of cookies.