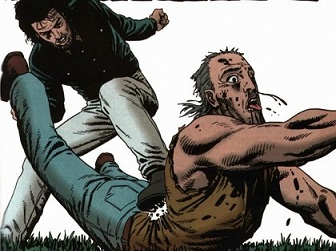 One good way to show that something is over is one person stomping on someone or something.

Sub-Trope of Coup De Grace, although it isn't necessarily the actual killing blow - it can be more for dramatic effect than necessity. Sister Trope to Kick Them While They Are Down, as it's specifically about stomping, and about the dramatic impact of that movement. The finishing move to a definitive Curb Stomp Battle.

See also Weapon Stomp, that can also end a fight, and Giant Foot of Stomping.

Examples of Finishing Stomp include: