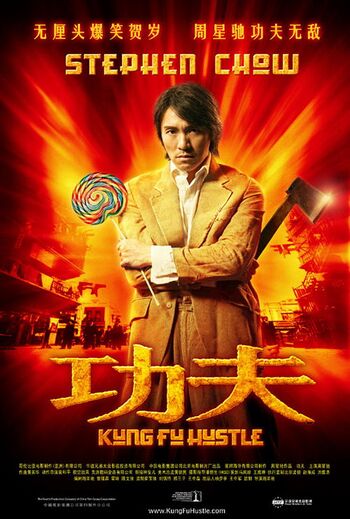 1930s Shanghai is in the grip of various gangs struggling for power, with the Axe Gang being foremost. Main character Sing is an ineffectual small-time crook trying to join the Axe Gang. In doing so, he and buddy Bone attempt to command respect from the Pig Sty Alley. Their bumbling attracts the real gang, who are repelled by the martially-skilled Coolie, Tailor and You-Tiao (fried dough sticks) baker. What results is an Escalating War between the Axe Gang and the (unusually strong) residents of the impoverished Pig Sty Alley.

Directed, led and written by famous Hong Kong comedian Stephen Chow, it is a comedic parody of and homage to Chinese Wuxia films and American musicals from the 50's, best summarized, in the words of Roger Ebert, as "like Jackie Chan and Buster Keaton meet Quentin Tarantino and Bugs Bunny". But really, it has to be seen to be believed.

Compare Shaolin Soccer and God of Cookery, from the same creator.

Tropes used in Kung Fu Hustle include:
Retrieved from "https://allthetropes.org/w/index.php?title=Kung_Fu_Hustle&oldid=1963079"
Categories:
Cookies help us deliver our services. By using our services, you agree to our use of cookies.