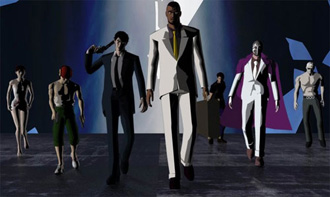 Where do we start? Well, for one thing, this game is the brainchild of the developers who designed Lollipop Chainsaw and No More Heroes, and with a resume like that, you would expect Killer 7 to be freakin' bananas, which is certainly is.

In an alternate timeline, a worldwide ban on nuclear research—and the firing of all nuclear missiles into each other high in orbit—allows mankind to finally achieve world peace several years into the 21st century.

During this peacetime, a group of mysterious, vicious creatures known as "Heaven's Smiles" begin to attack; they start by attacking delegates at a key treaty signing, then begin striking at random from there. The Heaven's Smiles appear to exist specifically to cause terror, but only one person knows their true purpose: their leader, an enigmatic man known only as Kun Lan.

To stop Kun Lan and the Heaven's Smiles, the elderly, wheelchair-bound Harman Smith—a man who bears a grudge against, and shares some history with, Kun Lan—utilizes "killer7", a group of specialized assassins trained to deal with high-level threats to the security of the United States.

While this plot summary appears clear and concise, it only scratches the surface of the game's story. As the Smiths keep getting called in to deal with each new threat from Kun Lan, a deep conspiracy with ties to the origins of both killer7 and the Heaven's Smiles comes to light, and dozens of twists and turns follow.

With that, we depart from the realm of sensibility. Killer7 can become an exceedingly confusing game, thanks to its multiple layers of metaphor and symbolism. Themes of war, religion, personal conflict and politics all weave into one gigantic Mind Screw, wrapping around each other like the bondage straps around Iwazaru.

In contrast to the Mind Screw storyline, the developers uniquely streamlined the gameplay of Killer7: a character moves along a set of predetermined paths, so all a player can do is choose forks and turn around. When attacked, players hold down a button to switch into first-person view and aim crosshairs manually (similar to Resident Evil 4). The Heaven's Smiles remain invisible until players use another button to scan for them; as they approach, players can see an obvious glowing spot upon them, and while shooting this spot results in their instant death, players will find it difficult to do so. Any enemy who gets in too close to the player will laugh at the player before exploding and causing damage. Death Is a Slap on The Wrist most of the time—as Garcian can retrieve the severed heads of the other Smiths and revive them—but if Garcian himself dies, the game ends.

While players can practically count the polygons in the characters's faces, the game makes excellent use of shading and shadows to create a unique graphical style. Two levels also feature anime cutscenes, both done by different studios.

Suda 51 (who went on to do No More Heroes) created this game, and Capcom published it on the Gamecube and Playstation 2. In 2012, Suda began work on Killer Is Dead, a game project he says will serve as a Spiritual Successor to Killer7.

In the name of Harman...
Retrieved from "https://allthetropes.org/w/index.php?title=Killer7&oldid=1801645"
Categories:
Cookies help us deliver our services. By using our services, you agree to our use of cookies.