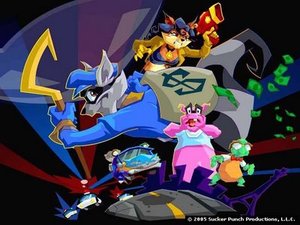 The Gang, and Carmelita.

A series of 3D platformers from Sucker Punch and Sony. The only slightly lesser-known member of the Playstation 2's trio of Mascots, along with Jak and Ratchet.

Set in a world populated by funny animals, that takes pains to resemble a Saturday morning Animated Series, the three titles in the Sly franchise tell the tale of the world's greatest, yet most honorable, thief.

The Cooper family (all raccoons) have been thieves for generations, extending back to prehistory if the stories are to be believed. Sly, the latest in the line, is orphaned as a child when rivals show up at his father's home to finish him off. In the orphanage, he picks up two lifelong compatriots, genius Bentley (a turtle) and super-strong Murray (a hippo). They grow up, and set off into the world to honor the Cooper legacy, mostly by robbing other criminals blind. (There's no challenge in taking from good people; taking from thieves is a real test.)

The gang is pursued by Carmelita Fox (a fox, naturally), Interpol inspector and primary love interest. As with Zenigata in Lupin III, Sly normally sets the bad guy he's up against to be arrested by Carmelita after he's done with them, while he escapes. [1]

The gameplay in all three titles is fairly consistent. Sly has incredible jumping and climbing ability, and can move silently for stealthy knock outs. Most missions involve getting to somewhere, fighting some guards, doing a minigame puzzle, and getting out again.

In the second game, Murray and Bentley are playable, with an even bigger cast in the third, including some missions played as Carmelita (the gang tricks her into helping them out).

A teaser trailer for Sly 4 was discovered in the Sly Collection. The fourth game, named Thieves in Time will be out in 2012.

Sly was announced to be a playable character in Play Station All-Stars Battle Royale on April 26, 2012.

As a video game stylized after a cartoon, it draws heavily on Animation Tropes and Video Game Tropes.

Tropes used in Sly Cooper include:

Retrieved from "https://allthetropes.org/w/index.php?title=Sly_Cooper&oldid=1968099"
Categories:
Cookies help us deliver our services. By using our services, you agree to our use of cookies.