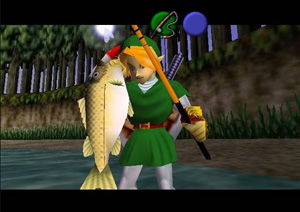 Good job on catching that fish. Now get back to work!

Many video games are made in Japan, and one of Japan's leading food industries is fishing. This is a culture where squid and octopus are seen as viable daily snacks, so fishing is pretty ingrained into the culture. So if the video game you are playing is Sidequest-ish and Mini Game-ish enough, it will have a fishing minigame.

Fishing minigames also occasionally appear in Western games, mainly those that fall on the more "simulationist" side of the "game"/"simulation" line. Something about fishing is impossibly tempting to simulationists. They're obviously addicted to bass. Or maybe they just enjoy boredom. Who knows?

Fishing minigames are often Luck based missions, much to players' annoyance. Especially when fish aren't the only thing you can catch.

Examples of Fishing Minigame include:

Retrieved from "https://allthetropes.org/w/index.php?title=Fishing_Minigame&oldid=1904820"
Categories:
Cookies help us deliver our services. By using our services, you agree to our use of cookies.