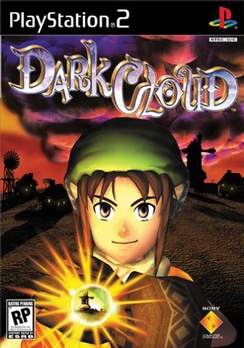 A pair of action/RPGs produced by Sony and Level 5 for the Playstation 2 (Dark Chronicle is known as Dark Cloud 2 in North America).

Not to be confused with the Cloud of Darkness, or the novel The Black Cloud by Fred Hoyle.

Dark Cloud (2001) - The original game stars Toan, a young boy living in Norune Village. During a celebration, the village is devastated by an evil force known as the "Dark Genie". Luckily, the Fairy King manages to save the inhabitants and their belongings by hiding them in a nearby cave as "Atla". He then gives Toan a mystical orb, as well as the task of venturing into the cave and recovering the pieces of Atla to rebuild the village. However, after the village is restored, Toan must now journey the world, restoring what was lost during the Genie's attacks. He eventually meets with other playable characters: Xiao, Goro, Ruby, Ungaga, and Osmond. 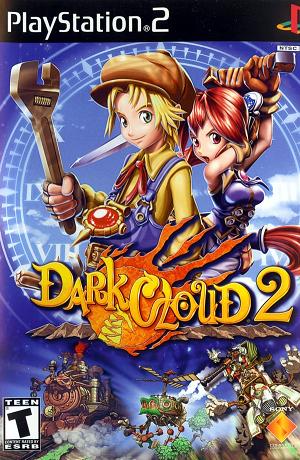 Dark Chronicle (or Dark Cloud 2) (2003) - Maximillian (or just Max) is a boy who resides in Palm Brinks, which is mysteriously cut off from the rest of the world. Max loves to create a myriad of inventions while working in the local repair shop, run by an old man named Cedric. While attending a circus in the town square, Max is attacked by the ringmaster Flotsam and his goons, who are after the red jewel that Max wears around his neck. Upon escaping, he discovers an abandoned railroad, which connects to "the outside world". With Cedric's help, Max restores the trains and leaves the town, and quickly runs into Monica, a female knight from 100 years into the future. She carries the same jewel as Max, except hers is blue and worn as a bracelet. She tells him that the forces of evil (Emperor Griffon and his servants) are erasing things from her time period as well as Max's, but with the power of the Atlamillia (the jewels), they can fix the time periods by recovering their "origin points".

Unlike in the original game, there are only two primary playable characters, although Max and Monica have secondary abilities of attack; Max is given "Steve the Ridepod", a machine built by Cedric, and Monica can collect monster badges, which allows her to morph into monsters. They are also given 2 weapons each to compensate. Max uses blunt items--mainly wrenches and hammers--and a gun, while Monica uses swords and armlets. Many of the weapons are repeated from the previous game: Monica uses a lot of the same swords and armlets as Toan and Ruby.