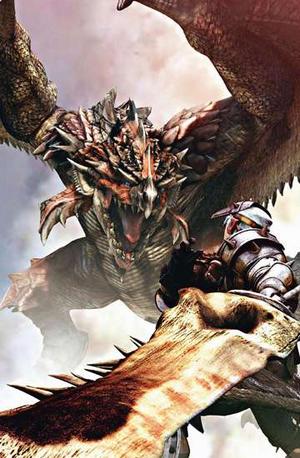 Kill dangerous wildlife and wear it as a hat.

Monster Hunter is one part role playing game, one part action game, one part MMORPG and two parts adventure game, cooked by a pack of anthropomorphic cats and lifted from the flames the second it turns a delicious bronze hue, all to the sound of a surprisingly cheerful jingle. So tasty!

Developed and published by Capcom, it wasn't so big a smashing success in the United States as it was in Japan. However, its portable sequels are among the most popular games available for the PSP, and subsequent sequels have been released on the Nintendo Wii, PSP, and Nintendo 3DS (an expanded port of the Wii game, and also a new game).

Monster Hunter is a unique experience. Playing as a hunter assembled from a list of faces, voices, etc., you try to make a name for yourself battling an array of increasingly bigger and nasty creatures that can kick your butt shockingly fast if you're unprepared and/or rush them head-on as if they're Mooks. Each Monster not only has a variety of attacks, but a number of both subtle and overt visual and audio cues to each action, as well as its own status. Recognition of these cues is crucial to properly defeating them. A typical Monster Hunter battle has a graceful Zen-like quality to it, like a bullfight with a 700-pound gorilla (or wyvern, or dragon, or Giant Enemy Crab) should.

The weapons and armor store is actually pretty weak, and everything they sell will be out of date only a few hours from starting the game. To get better equipment, the player has to assemble his or her own equipment from parts of fallen monsters as well as activities like combining, mining, fishing and bug collecting. Has nothing to do with He Who Fights Monsters, though.

How popular is it? Portable 3rd for the PSP, sold over four million copies in Japan alone in a mere two months. Cha-ching!

Here is the list of monsters you will inevitably encounter.

Tropes used in Monster Hunter include:
Retrieved from "https://allthetropes.org/w/index.php?title=Monster_Hunter&oldid=1941924"
Categories:
Cookies help us deliver our services. By using our services, you agree to our use of cookies.