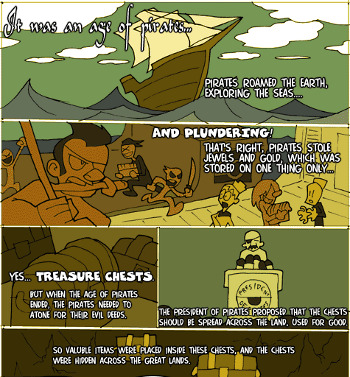 It was a watchtower for crying out loud. Thousands of years ago when this place was brand new it had nothing of value. Nobody has come along since then and added treasure for you.
—DM of the Rings

I dunno what the world's coming to if treasure chests in underground tunnels can't be relied on to contain treasure!
—Luso, Who clearly plays too many Final Fantasy games

Their existence is generally shrouded in mystery. Who is responsible for putting them there? Somebody had to have done it at some point. ("The game designers" don't count.) Think about it. Treasure chests just don't materialize spontaneously—except in some games where they actually do appear out of thin air.

Furthermore, why are they almost always brightly colored, as if to stand out? Have you ever seen a bright red and gold treasure chest in real life?

And why are they invariably brand new-looking without the slightest hint of wear, even if the temple or dungeon they are located in supposedly hasn't been visited for 10,000 years? Bonus points if they contain food or other perishables.

And perhaps most strangely, why doesn't anyone ever open them except you? This is sometimes subverted by having several of the chests in a dungeon be empty, perhaps indicating other adventurers have passed through—although there's usually no pattern to which are open and which aren't. Of course, there might be a reason after all...

Occasionally, this trope makes sense if you're raiding, say, the ruins of an abandoned castle—the chests are thus implied to be the wealth of whoever lived there. But the question still comes up of where the items in most other places, such as the Planet Heck, came from...

Probably the most ridiculous manifestation of this trope comes in instances where monsters drop chests. It isn't so ridiculous for bigger baddies who could just swallow whole convoys, boxes and all, but what about smaller creatures which could fit into the boxes themselves?

Buried Treasure, aka Pirate Booty is a related sister trope.

For other things that probably shouldn't be there, see Blatant Item Placement.

Examples of Inexplicable Treasure Chests include:

Karol: Sand and bones, cacti and treasure chests, the sky and the wind and the sun and...

Karkat: WHAT IS IS WITH ALL THESE CHESTS ANYWAY? AND WHY DO WE KEEP SQUIRRELING OUR USELESS SHIT AWAY IN THEM? I REALLY SHOULD HAVE WRITTEN A MEMO ABOUT THIS. LIKE, THE RULES OF CHESTIQUETTE.
[...]
Kanaya: Well I Think The Chests Are Fun They Make For Nice Suprises