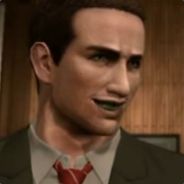 Clear as a crisp spring morning!

Greenvale. An unassuming small American town with all the necessities--a gunsmith, a gas station, a diner, two pubs--and little out of place. Certainly not the kind of place you'd expect to find the mutilated body of a young girl, stripped and bound to a tree as if crucified, left to be found by two young boys. The inexplicable appearance of monstrous humanoids which bleed purple and have a compulsion for bending over backwards and jamming their arms down one's throat is a little odd, too.

Francis York Morgan (just call him York, that's what everyone calls him) is an agent of the FBI with a special interest in murder cases involving young women. He works alone, save for the company of his invisible friend and confidant Zach (don't ask) and has little patience for local law enforcement. They've never seen anything like this, and York is not inclined to explain every little thing to them. Even so, an agent can't work without information, and York will need all the leads he can get if he wants to get to the bottom of this case. Kind of reminds you of Twin Peaks after a little while.

Deadly Premonition, also known as Red Seeds Profile, is a game for the Xbox 360, PS3 and PC released in 2010. While panned by reviewers for its less than stellar graphics and uninspired combat system, its quirkiness and personality combined with surprisingly able storytelling have made it a possible Cult Classic in the making.

Tropes used in Deadly Premonition include:
Retrieved from "https://allthetropes.org/w/index.php?title=Deadly_Premonition&oldid=1740225"
Categories: