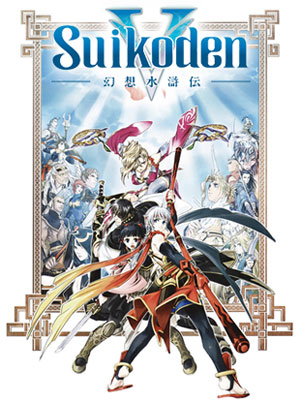 Set five years before the events of Suikoden I, Suikoden V chronicles a period of great internal strife in the Queendom of Falena: two noble factions are wrestling for control of the queen's favour, and the queen herself is slowly succumbing to the insanity of the Sun Rune- one of the 27 True Runes- that she was forced to bind to herself years before.

The main character is the prince of Falena's royal house of Falenas; a figurehead who mostly gets sent on unimportant ceremonial missions for the Queendom (since he's not in line to the throne). That is, until a coup d'état forces him out of Falena and into hiding. With his little sister forced to act as the head of a puppet government, it's up to our scrappy royal-in-exile to step out of the shadow of those who would manipulate him for their own ends and gather an army to take back his homeland and restore order to the Queendom.

The game is filled with Continuity Nods and Shout Outs to Suikoden I and especially Suikoden II, in a deliberate attempt to get back to the series' roots.

Tropes used in Suikoden V include:
Retrieved from "https://allthetropes.org/w/index.php?title=Suikoden_V&oldid=1881834"
Categories:
Cookies help us deliver our services. By using our services, you agree to our use of cookies.