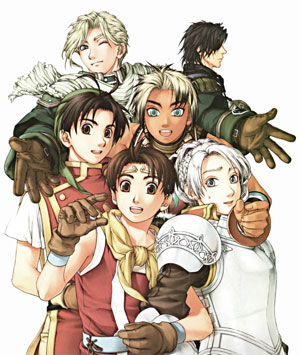 An artwork featuring the main heroes of the franchise, before 2004's Suikoden IV.

Suikoden is a series of games (released on various consoles, starting with the original Playstation) that are loosely based on a classical Chinese novel The Water Margin (or Outlaws of the Marsh and All Men are Brothers). These games are notable in that they all take place in the same world, although at different periods and locations throughout its history. Some games are chronologically close enough to each other that they feature many of the same characters, although the main hero (or heroes) of the game are always new characters. They tend, as a rule, to be Kid Heroes, but not always...

Certain major themes which run throughout the series are:

Combat occurs in the game via Random Encounters, strategic war campaigns against enemy armies and one-on-one duels, each with its own graphics and battle system.

Suikoden III is a notable deviation from the other games, in that it is about a trio of heroes, each of whom has an equal chance of possessing the game's main MacGuffin, the True Fire Rune. At one point in the game, the player gets to choose who acquires the Rune, a choice which will affect the plot for the rest of the game.

The Suikoden universe is encompassed by 6 console games: Suikoden, Suikoden II, Suikoden III, Suikoden IV, Suikoden V and a group of spinoffs: a Strategy RPG game Suikoden Tactics (Rhapsodia in Japan); two canon Visual Novel games called Genso Suikogaiden 1 and 2, featuring the adventures of Nash Latkje which provide background to Suikoden II and foreshadowing for Suikoden III; a GBA adaptation of the card game shoehorned into a retelling of Suikoden II's plot; and a Nintendo DS spin-off called Suikoden Tierkreis, which is set in an alternate universe unconnected to the main Suikoden world, none of which save Tierkreis have seen an English language release. There's also a slot machine game released in 2010, which saw the fans basically thinking "so this is how it ends, huh?". And then a new PSP project is announced.

Among fans, Suikoden II is usually considered to be the strongest of the series (too bad it's also the one you're least likely to find, and the most expensive if you do find it), while Suikoden IV is widely seen as the weakest... but Your Mileage May Vary. While not as graphically flashy as other video game series like Final Fantasy, this series has a lot to offer for gamers who like long and involved plots filled with intrigue and interesting characters.

Due to Konami's decision to shift focus away from console games in favor of pachinko and mobile games, the future of the series has seemed bleak or even non-existent. From there, the series has gained several Spiritual Successors, including Celestian Tales: Old North, The Alliance Alive, and from the original creators themselves, a new game called Eiyuden Chronicle: Hundred Heroes, which as of August 2020 is undergoing a Kickstarter campaign.

Tropes used in Suikoden include:
Retrieved from "https://allthetropes.org/w/index.php?title=Suikoden&oldid=1811606"
Categories:
Cookies help us deliver our services. By using our services, you agree to our use of cookies.