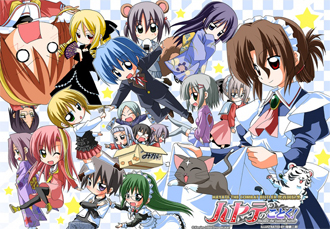 Now, try to spot the one that's supposed to be ugly.

Consistent symmetry invariably means a character will usually lean towards the state of being generically attractive. This is a hard rule in Bishoujo Series where even plain characters will look attractive, but fundamentally a result of drawing a character that is aesthetically pleasing. Also, for obvious reasons, drawing a character consistently means the hard and fast details should be easily reproducible... and marketable.

This makes it especially jarring when we're told a character is physically unattractive, gained a few pounds, or has bad skin. It's too much work to draw these minor details. The only way to combat Generic Cuteness is with a Gonk or you end up with a disarming cutesy look in some wildly inappropriate things.

For obvious reasons this should be weighed against how pretty the general mood of a series is but even your gritty action hero plot will usually reserve its uglies for bad characters—and then they will likely be actual grotesques.

Occasionally this pops up because your story is filled with Loads and Loads of Characters but there are Only Six Faces. Some artists attempt to avert Generic Cuteness by hinting at some form of sorting algorithm of in-universe prettiness among their six faces so that the audience can tell that someone is supposed to be attractive without the characters explicitly stating it, though this may result in making every ugly, plain or beautiful character look even more alike.

One common trick is what distinguishes the Meganekko from the dope with Nerd Glasses. It's not that glasses are ugly, it's just obscuring the face is one of the most jarring things to do, and thus not cute.

This trope can lead to Informed Deformity or Ugly Cute. Contrast Informed Attractiveness. See also Hollywood Homely and Artistic Age. Artist might attempt to dispel this by using a Beady-Eyed Loser.

Examples of Generic Cuteness include: