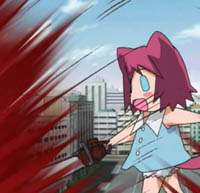 Generic Cuteness is taken for granted. You have all manner of strange things depicted as cute. But way past the vampire loli, you have the deliberately over-the-top depictions, where Sickeningly Sweet saccharine cuteness is depicted with wild, graphic violence.

For obvious reasons, these situations are more common in shows dabbling in satire.

Not to be confused with Ugly Cute or finding Joseph Merrick intensely lovable (see What Measure Is a Non-Cute?).

Examples of Grotesque Cute include: