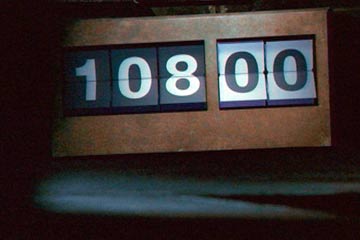 The Numbers are bad!

The number 108 is a significant number in Buddhism. It represents the number of temptations that humans face, which tie them to the Wheel of samsara. There are many religious elements related to this number—a bell is rung 108 times to bring in the New Year in Japan. It is the number of beads on a Buddhist o-juzu or rosary. A classic pilgrimage in Japan visits 108 temples. Also, it's 2 to the second power times 3 to the third power -- obviously important (Then again, 2 and 3 are the first two prime num- wait, 23? Oh come on, man!). Or put another way it is 1^1x2^2x3^3.

This number crops up frequently in anime, video games, and other media produced in Japan. Like the numbers 13 or 7 for Western culture, it is ascribed a mystical significance far outside the original definitions. It has no readily comparable analogue to a modern Western viewer, however, though lots of similarities with the Medieval or Renaissance use of the number nine, which was considered perfect, the trinity of trinities, square of the first "real" prime (2 didn't count, sometimes, because it was even), etc.

Compare Four Is Death and its Western equivalent, the Number of the Beast; however, note that the number 108 is not always used in a negative sense as these other two examples generally are.

Retrieved from "https://allthetropes.org/w/index.php?title=108&oldid=1849122"
Categories:
Cookies help us deliver our services. By using our services, you agree to our use of cookies.