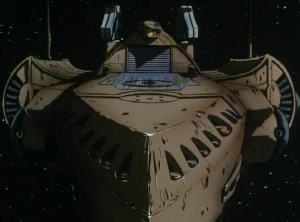 The Bebop has seen better days.

Some Speculative Fiction Series focus on a Cool Starship or two that's shiny and new and full of all the latest Applied Phlebotinum. The shows are all about idealistic and well-funded explorers or warriors, boldly going where angels fear to tread.

Shows on the other end of the Sliding Scale of Shiny Versus Gritty treat the future as a place where real people live, and where spaceships look dirty, dingy, and used, like heavy equipment that one might find at a lonely truck stop in the middle of the night right now. The ships are old junk heaps run on a shoestring by hard-bitten characters on the edge, seemingly held together with two pieces of string, chewing gum, and the will of the Holy Spirit—the SF equivalent of the struggling Film Noir private eye, in other words. This is the Used Future, and it's home to renegades, regular working stiffs, and anyone on the "cynical" end of the Sliding Scale of Idealism Versus Cynicism. Think of it as Dieselpunk In Space!

Sometimes, there will be Shiny-Looking Spaceships alongside dingier ones; usually these new, ascetic and shiny ships will belong to the Galactic Military which has access to constantly churning shipyards and the newest heights of technology while the heroes must survive on surplus gear and homegrown repairs. These Shiny-Looking Spaceships, however, can denote that the crew piloting these über-ships is formed of completely green recruits with no real combat experience, often led by a pompous noble, while the battered ships are piloted by grizzled veterans who can fly circles around them.

The original Star Wars popularised the concept (although arguably Moon Zero Two (1969), Silent Running (1972), and Dark Star (1974) led the way.) For contrast, the prequels, set in a more civilized time, are correspondingly shinier. (Star Wars is a rare example on the "idealism" end of the above-mentioned scale.)

Interestingly, portraying this in CG effects is actually more difficult, but sometimes the audience won't accept things not looking dirty enough. Which can be ironic because spaceship exteriors are actually perpetually shiny in real life (due to the scarcity of dirt, grime and oxidizing agents in space)--unless they have to endure high-velocity atmospheric reentry.

Actually justified, if ships use a layered-ablative-standoff-armor setup like the Whipple Shield which takes advantage of the tendency of small objects moving at comically-high speeds to shatter on impact, and lets the first armor layer shatter the junk (which makes a very tidy hole through the outer layer), and the second layer absorbs the (much less dangerous) spray of components without having any holes in it. This would have a scarred and pitted look after a while, and if the ship's owner didn't have money to replace sections of the shield as necessary, it could be this trope to a T.

Examples of Used Future include:

Retrieved from "https://allthetropes.org/w/index.php?title=Used_Future&oldid=1931615"
Categories:
Cookies help us deliver our services. By using our services, you agree to our use of cookies.