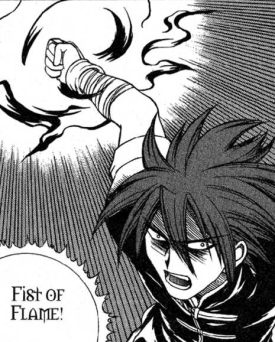 Special delivery for you

Some people are satisfied with Good Old Fisticuffs; to them, there's nothing more gratifying than pummeling mooks left and right with your fists. Other people would prefer killing them with fire; perhaps they just just love that smell of napalm in the morning.

And then, there's the people who Take a Third Option: After all, a punch hurts. Fire hurts. A punch of fire is bound to hurt twice as much as either of the two individually. And thus, the art of combining Elemental Powers with close-quarter combat was born.

The Elemental Punch is a melee attack that has an elemental or energy-based upgrade. These come in quite a few flavors:

Of course, punches are not the only attacks that can be elementally empowered. Elemental kicks are almost as, if not just as, common. Channeling elements into weapons happens quite a bit, if the Flaming Sword and Laser Blade are any indication. And, of course, there's nothing quite like pummeling the enemy with a flying, full-body tackle whilst encased in one's element of choice.

This is a tactic that comes naturally to the Magic Knight and the Supernatural Martial Artist, and, understandably, usually requires Full-Contact Magic. In Video Games, this trope is often employed to prevent non-magical fighters from being excluded from Elemental Rock-Paper-Scissors. This may be seen as a Yin-Yang Bomb, combining matter with energy. Compare the Trick Arrow, the archer's answer to the Elemental Punch. See also Swiss Army Appendage, Blasting Time and Power Fist.

Examples of Elemental Punch include:

Retrieved from "https://allthetropes.org/w/index.php?title=Elemental_Punch&oldid=1800352"
Categories:
Cookies help us deliver our services. By using our services, you agree to our use of cookies.