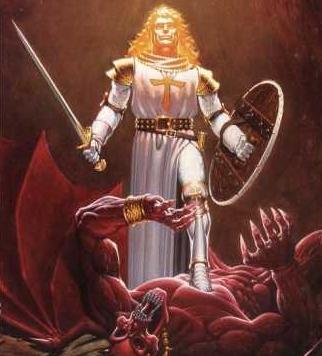 Paladins are warriors dedicated to furthering the cause of all that is good. Holy crusaders, they combat the forces of evil wherever they are found, and defend the helpless as much as possible. Above all else, paladins are good. An evil paladin is a literal contradiction of terms; a paladin that turns evil ceases to be a paladin. As holy warriors, they're almost always associated with The Order, which are usually religious, or at least spiritual, in nature. While their Order may be tied to a specific church, they are just as often dedicated to a more general power (frequently The Light). As such, paladins are frequently Church Militants and may have aspects of the Warrior Monk. When not part of The Order, they will instead be a Knight Errant.

Paladins tend to fall in the middle of the Sliding Scale of Idealism Versus Cynicism. They certainly believe that Humans Are Good, but they tend to deal with most evil by hacking it into bloody chunks rather than trying to redeem them. The archetypal paladin is a Lawful Good Knight in Shining Armor for whom Right Makes Might, but this isn't always the case. Though always good, paladins are not always nice. They may even be a Knight in Sour Armor—but never a Well-Intentioned Extremist or a Knight Templar. When faced with a To Be Lawful or Good dilemma, a paladin's best option is to choose to do Good.

A popular character class in both digital and tabletop Role Playing Games, Paladins tend to be Magic Knight variants who focus more on White Magic and defense compared to the Magic Knight's offensive spell-slinging. As such, they usually fill the role of the tank in groups, though they may be able to function as a Combat Medic as well; when not working with a party, they're usually a Mighty Glacier. Paladins in games are usually very effective against evil enemies, particularly demons and The Undead—they almost always have the ability to use Detect Evil and Smite Evil against such foes.

Tabletop Games have a special relationship with the paladin, particularly Dungeons & Dragons, which codified many paladin tropes. Tabletop paladins are stereotypically exceptionally prone to being Lawful Stupid or Stupid Good, and Jerkass DMs are extremely fond of encouraging this by setting up Sadistic Choices invoking To Be Lawful or Good. As noted above, the correct answer is "Good," but don't expect that to make much difference against determined GMs. Ideally a Paladin's fall from grace should be a terrible punishment for choosing to perform either a genuinely Disorderly or Evil act, not the result of forcing a sadistic choice.

Compare Magic Knight (the more generalized and/or offensively-oriented counterpart to this trope), Combat Medic (who has healing as first priority and combat second), and The Paragon (the archetypical personality for a paladin).

Not related to C. J. Cherryh's stand-alone book The Paladin.

Examples of The Paladin include:

In addition to reinforcing that she was not just a jock, it also presaged her future role in the story, as well as a title she earned in a later story, "The Paladin of Titan". She also acquires a white steed whom Word of God confirms is a Paladin's Mount as defined by Dungeons and Dragons.

Retrieved from "https://allthetropes.org/w/index.php?title=The_Paladin&oldid=1935185"
Categories:
Cookies help us deliver our services. By using our services, you agree to our use of cookies.