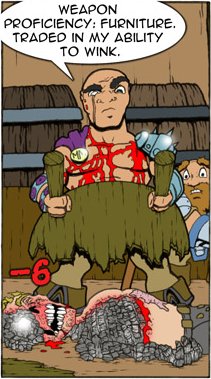 There are characters who as a result of their lifestyle or education have one area of great strength while being weaker in another. Some people might just have been born that way, but these guys sacrificed a basic skill for awesome training. Whether from lifestyle, schooling, or personal preference they have grown up without learning a very basic skill. It can be a chore like cooking or laundry, to more important things like reading and dating, or downright essential like dressing oneself and social interaction.

As a result of a sheltered and highly structured lifestyle where their education and training was tightly controlled, they become so that a key part in their upbringing or skill set is completely ignored, sometimes purposely by their teacher as "unnecessary" or distracting. Before long, they become something of an idiot savant: an expert artist that is nonetheless unable to carry out a basic ability. In extreme cases they may not even understand it.

This trope has two different setups. The more common one involves a character who spends their formative years in a convent, school or sequestered in a family home and trained in the "family ways". Usually, these involve warfare, magic, or assassination. Expect there to be Training from Hell and The Spartan Way especially that is so highly specialized it leaves no room for anything else. So instead of Home Ec 101, they're getting Tundra Guerrilla Tactics 101. The children who "graduate" are usually Tyke Bombs, in which case it was probably done purposely by their teacher. They might have considered it "unnecessary" or distracting, or useful to exclude both make their job easier and keep them tightly controlled. In the case of a school or the like, the students are likely so rigorously policed and kept apart that they don't interact enough to learn basic social skills.

The other set up is perhaps more alien, it's when a character purposely ignores the basic skill because he or she considers it "wasteful". This isn't just a Spoiled Brat forking off laundry to a maid, but usually a highly focused (or at least willful) character who purposely avoids all knowledge in that field in favor of more interesting pursuits.

Cue Fish Out of Water moment when the princess is dumped on the street, or the chaste assassin rebel starts interacting with the (very sexy) opposite gender. Usually they'll make a friend (or partner) who can help them with the missing skill.

If there is a whole team of people with the same absent basic skill, expect them to panic and try their best to do the job themselves. Understandably, you can expect hilarious results.

If the character has developed awesome abilities and lacks important skills due to a mental difference rather than Training from Hell, they may be an Idiot Savant or The Rainman. When what is sacrificed is common sense or social skill, it may lead to the creation of a Bunny Ears Lawyer. Compare Unskilled but Strong. See also Crippling Overspecialization.

Infamously used when Min-Maxing roleplaying characters, whether it makes any sense or not.

Examples of Sacrificed Basic Skill for Awesome Training include:

Retrieved from "https://allthetropes.org/w/index.php?title=Sacrificed_Basic_Skill_for_Awesome_Training&oldid=1685851"
Categories:
Cookies help us deliver our services. By using our services, you agree to our use of cookies.