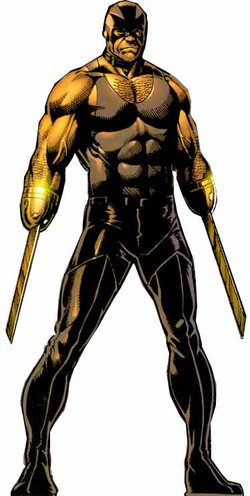 Razor Fist: Good at combat, very bad at feeding himself.

Competitive Balance exists so that there is some symmetry between specific advantages and the Necessary Drawback. If someone can hit hard but not take any damage themselves, they are a Glass Cannon. If they are unstoppable but slow moving they are a Mighty Glacier. A crippling overspecialization occurs when one, obscenely powerful advantage makes a trade-off that limits how effective it is.

In Real Time Strategy games, unit types are often specialized beyond all reason. They often have only one weapon, effective against just one particular kind of enemy, and usually cannot defend themselves at all if their particular weapon is ineffective. The most prominent examples can be seen in this genre, causing absurd situations where humongous tanks with huge anti-armor guns can destroy an enemy vehicle in a single shot, but will barely scratch unarmored soldiers. This is typically justified by the assumption that each individual infantry unit counts as a company or battalion. Armor penetrating weapons can kill one or two people, but they're not terribly useful against formations of 20-100 or more (which is why tanks in Real Life tend to have machine guns and anti-infantry shells).

This is usually a result of game balance. After all, if tanks are effective enough against other tanks and infantry, then why build anything else? Additionally, until recently, most units in games were depicted with only one weapon. A few might've had a second gun used for attacking enemy fliers, but that was about it.

See also Anti-Air and Strong Flesh, Weak Steel. Compare to An Adventurer Is You, where this is used to force players to work together. See also Sacrificed Basic Skill for Awesome Training for a characterization equivalent. Severely Specialized Store is a comedic variation.

Don't confuse "having a weakness" or "not being the best at everything" or even "not being quite good enough" as being this trope. Don't be tempted to list something because it failed in some way unless you can point a finger at its crippling specialty!

The opposites of this trope are the Red Mage and the Jack of All Stats.

Examples of Crippling Overspecialization include: