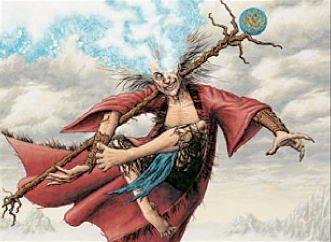 It seems like any major military or corporate backed venture to give a mundane person super powers or just enhance their normal abilities always results in the test subject going uncontrollably berserk as a side-effect.

Sometimes the choice of test subject is clearly to blame. Convicted criminals make pretty poor guinea pigs if you're trying to develop a Super Soldier who can punch out a tank, yet nobody in any of these programs ever seems to have been given the most basic psychiatric evaluation. The evidence indicates a connection between morals and one's ability to remain "sane." Normally, using the power makes you crazy the longer you use it, because Evil Feels Good, but a noble, heroic character is better able to stay in control.

Other times, it seems that insanity happens as a side effect for no discernible reason other than to justify the needs of the plot and/or give the super individual a weakness that they must struggle to balance and maintain. This also gives the Badass Normal their one edge over the competition as they lack this weakness.

This trope can also arise if the principle that knowledge is power is extended to Things Man Was Not Meant to Know.

Sometimes, the creators of the super being realize the error while in the prototype phase and will seal the subject away, hoping everyone just forgets about them. This never works. Often, the first subject to undergo the process—or a single subsequent subject—will turn out okay, so on top of all the various other issues that the treatment has, it's usually their job to clean up the mess made by subsequent failed attempts. If it's a Science Is Bad story, the sponsors of the program are likely to just keep pumping out nutty prototypes hoping they'll eventually make one that is not insane.

If all else fails, it'll seem like it happened just to make the Aesop "Power tends to corrupt, and absolute power corrupts absolutely" appear in the story. Karmic Death is a frequent end for not only the subject, but the scientists who created him/her/it.

May be either the cause or the result of Science-Related Memetic Disorder, especially if the person is already a Mad Scientist to begin with.

H. G. Wells used the trope in The Invisible Man, making it Older Than Radio. In fact, invisibility seems to drive one insane more than any other power, due to homage. Less well known, Plato had a story about invisibility with the same result. Because invisibility can do things like letting you escape easily without consequences or peek in the girls' dressing room.

Shapeshifting and telepathy are close seconds to invisibility as potential causes of this trope, probably due to Personality Powers; after all, changing identities too often might result in losing track of the real you, and having other peoples' thoughts in your head is a lot like voices in your head, right? Anything can theoretically trigger it, though. Getting energy blasts can result in Psycho Electro. Getting Charles Atlas Superpowers can result in Ax Crazy. Getting Flying Brick powers can result in A God Am I or Beware the Superman. Knowing that one is a Reality Warper will cause the warper to remake the world in his own image. And of course, think of all the Power Perversion Potential.

A.K.A. Comes Great Insanity for short, to go with the original version, Comes Great Responsibility. Compare The Corruption, Drunk with Power, God for a Day and Mad God.

Examples of With Great Power Comes Great Insanity include: