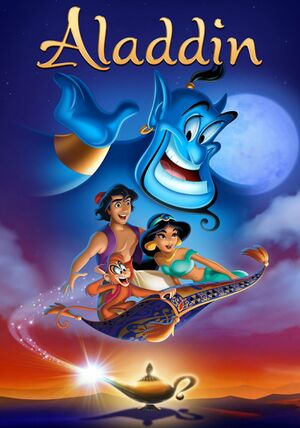 Aladdin is a Disney Animated Canon adaptation of the Arabian Nights tale of "Aladdin and the Wonderful Lamp", released in 1992.

Taking place in the fictional Arabian city of Agrabah, the title character, a Street Urchin always accompanied by his monkey, Abu, meets and falls in love with a fugitive Rebellious Princess, Jasmine—until he's arrested, by orders of the evil Vizier Jafar. Jafar then disguises himself and meets Aladdin in prison, convincing him to do him a task: get a magic lamp in a cave filled with treasure in which Aladdin can enter, because he is "the diamond in the rough". Aladdin and Abu enter the cave, where they meet a sentient magic carpet and are ordered not to touch anything but the lamp - but as Aladdin gets it, Abu seizes a giant ruby, causing the cave to collapse above the trio. As they awaken, Aladdin rubs the lamp - and out of it comes a comedic Genie, who is effectively a big, blue Robin Williams who can grant three wishes. Maybe now Aladdin can win Jasmine's hand in marriage...

The film was very successful (beating films like Lethal Weapon 3 and Batman Returns at the US box office), leading to two sequels, The Return of Jafar (the first one of those Disney direct-to-video sequels) and Aladdin and the King of Thieves, and also an Animated Series. All but King of Thieves replace Robin Williams with Homer Simps... no, Dan Castellaneta, because Williams didn't like his contractual demands being discarded.

Regardless, the biggest contribution this film did was to permanently establish in Western Animation the value of star power in casting voice actors. Gilbert Gottfried and John Rhys-Davies also co-star in major roles (though Rhys-Davies only turns up in King of Thieves). A theatrical adaptation (not to be confused with Aladdin - A Musical Spectacular in Disney's California Adventure) had its first official run at the 5th Avenue Theatre in Seattle, Washington from July 21, 2011 until July 31, 2011. It was directed and choreographed by Casey Nicholaw, who also won a Tony for his co-direction in The Book of Mormon, and elements from Howard Ashman's original idea of the film were used. One interesting casting choice was the return of Johnathan Freeman as Jafar.

Also produced at least two completely separate and distinct video games based on the first film; one by Virgin Games for the Sega Genesis, Amiga, PC and Game Boy, and one by Capcom for the Super Nintendo and Game Boy Advance. Both are really good. There was also one made by Sega for their Master System, which was more faithful to the story but it isn't quite as well-known.

The original movie provides examples of

Unfortunately the animators apparently had never heard the phrase, so they animated actual Doric columns instead of a menu.

The sequels provide examples of

Tropes used in the animated series

Retrieved from "https://allthetropes.org/w/index.php?title=Aladdin_(1992_Disney_film)&oldid=1843790"
Categories:
Cookies help us deliver our services. By using our services, you agree to our use of cookies.