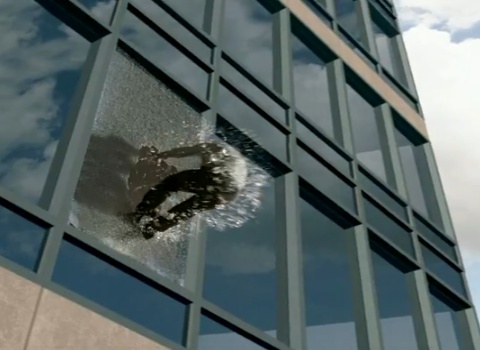 There goes Chad from Accounting...

The sad fate of many a Mook...mostly because it looks really cool. A sufficiently Badass characters punches, throws, or in any other way applies the force necessary in order to toss someone else through a window. A loud clangy window with shards rippling everywhere.

How we see this trope typically depends on who is doing it. If a heroic character does it, we actually see them throw someone out the window, but typically not the very messy landing. With villains it's the other way around- to emphasize the cruelty. An ambiguously portrayed character may perform this feat, but you'll have to Take Our Word for It, since showing this trope usually inspires some sort of positive or negative feeling with whoever is doing it.

See here for a full 7 and a half minutes of compiled Defenestrations and Window Jumps.

Examples of Destination Defenestration include: