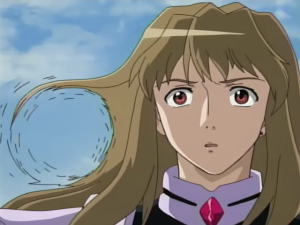 Well, at least she didn't break a nail...

In either a gunfight or a sword battle, sometimes the bullet or blade gets just a bit too close for comfort, and you often see a Close-Call Haircut with a few cut strands of hair blowing around to indicate just how close the character came to getting hit. May also mark the point in the battle when the gloves come off, especially if one or both of the fighters are female and it suddenly becomes personal as soon as the female character's beauty is involved (a possible Double Standard, though this has been known to happen to the White-Haired Pretty Boy).

May overlap with Important Haircut or Traumatic Haircut in some cases. See also Slipknot Ponytail and Hat Damage.

The trope was popularized during the Renaissance, when sword-wielding folk moved away from large and cumbersome cutting tools to lighter weapons that allowed additional finesse. Trimming an opponent's moustache or removing buttons in a declared order was a way to demonstrate one's superior fighting skills, culminating in the famous 'slice your initial in your opponent's clothes without actually breaking his skin' maneuver made famous by Alex Thoth's 'Zorro'.

Examples of Close-Call Haircut include:

Retrieved from "https://allthetropes.org/w/index.php?title=Close-Call_Haircut&oldid=1863476"
Categories:
Cookies help us deliver our services. By using our services, you agree to our use of cookies.