Blown Across the Room 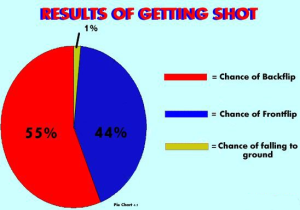 "Any outdoorsman will tell you the most frustrating part of hunting is when a deer simply FALLS DOWN' when shot, and doesn't FLY BACKWARD into the forest. Those days are over. Anything this baby hits better PACK A LUNCH, cause it is going for a ride!"
—Force-a-Nature publicity blurb, Team Fortress 2

In a movie, you can reasonably expect a gun to be able to do anything, be it firing shots that travel faster than sound without making any, sounding like it's about to fall apart while working normally, fire all day long without a reload, or, as here, throwing a normal-sized human clean across a room with a single shot. Preferably through a Sheet of Glass while it's at it.

This Trope exists because, as humans, we tend to associate power with muscle strength, and thus the ability to move things. A heavyweight boxer, we reason, can lift a grown man off his feet with a powerful uppercut and a car can throw an unfortunate pedestrian into the air over its hood, so surely a gun, which we see as more powerful, would be able to produce an even more devastating blow on impact.

However, there are massive mechanical differences between the types of collision. A bullet is a streamlined, hard object which focuses a large amount of kinetic energy onto a small area, but has relatively little momentum due to its small size in comparison to a human, meaning it has little ability to drive an object back. A boxer's fist, on the other hand, has far more momentum and a much broader contact area. The much higher pressure will cause the bullet to impart massive stress to a tiny area, causing it to penetrate rather than shove backwards; conversely, you are unlikely to see a boxer put his fist through his opponent's torso because of the very low pressure caused by the large contact area. High-powered rifles just make the bullet still more likely to go through the target rather than be stopped and have to shove it back.

Additionally, in a hand-held firearm the shooter or weapon must deal with a backward force equal to the force of the projectile being fired; in a non-recoiless operation like a movie small arm, this would mean the gun would hit the shooter with enough force to also throw him fifteen feet into the air on firing, with the addition of all the energy the bullet lost due to friction on the way to the target. The Law of Inverse Recoil tends to be in full effect regarding this.[1]

A theoretical situation where this Trope might occur would be if the target were wearing a very strong suit of armour and were hit by a very large, heavy projectile (or self-propelled rocket) made of equally strong material; with neither body able to give way, the target would be forced back by the impact. It is possible for a disproportionate response to an impact to result from involuntary muscle spasms, in the same way that an electric shock can "knock you over". However, while that explanation could reasonably cover "the victim's limbs flew out and he crashed over on his back," and there are cases of people staggering back, sometimes for several metres, after having being pushed off balance by a bullet impact, it kind of falls apart when you try to stretch it into "the victim hurtled fifteen feet backward."

The core of this is the law of conservation of momentum. Mass times velocity must equal mass times velocity. As noted above, some losses occur due to air friction, but the other key is elasticity. In elastic collisions (where neither object is penetrated or deformed) every bit of energy is transferred at the moment of collision (think pool balls). In inelastic collisions (where one of the objects gets deformed) some of the energy gets "used up" deforming the object (it's why cars have crumple zones, better that the energy is used to twist steel instead of you).

Of course, this doesn't apply in Hollywood. Bullets can throw you spinning into the air and still leave exit wounds, throw some targets violently across rooms while others fall forwards due to the availability of a Railing Kill [the force which causes this phenomenon is called Ledge Gravity], or more or less whatever else the director thinks they should be able to do. The results may, however, end up falling under What Do You Mean It's Not Awesome? or Refuge in Cool if done right.

In reality this effect is accomplished by a stuntman wearing a harness pulled backwards by a hydraulic or pneumatic machine. However, recently, similar to The CSI Effect, there has been instances where people have actually thrown -themselves- backwards when shot/shot at even if it's a low velocity round like a beanbag.

Examples of Blown Across the Room include: