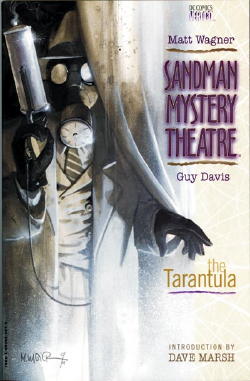 Dateline: New York City, 1938. America has seen off the worst of The Great Depression, but all is not well in the big city. In the midst of the towering skyscrapers, rowdy jazz clubs and high society glamour, crime, poverty and prejudice run rampant in the streets. One man follows his dark dreams, to take up arms against this sea of troubles.

By day, he is Wesley Dodds, reclusive industrial heir. By night, he becomes...

Sandman Mystery Theatre is a comic book written primarily by Matt Wagner and Steven Seagle from DC's noted Vertigo imprint, a Revival of the Golden Age Superhero and founding member of the Justice Society of America, Sandman, a Badass Normal in the Batman tradition, who debuted around the same time, who fought crime using a gun that fired sleeping gas. The title's genesis was Dodds' brief appearance in the opening issue of Neil Gaiman's celebrated series of the same title, only tangentially connected to Gaiman's work via Retcon.

Dream of The Endless' runaway success inspired a new series, focusing on the original character to bear the Sandman moniker, but heavily reworked to remove the original's more Campy elements (purple cape, custom made yellow and blue gas mask, Kid Sidekick, etc.). In fact, it could be argued that Wagner's Sandman owes about as much to the Golden Age title as Gaiman's does. We have Wesley Dodds fighting crime in a gas mask with a gas gun and calling himself The Sandman. There the similarity to the original ends.

Instead of Superhero comics of the period, Wagner's work draws more heavily from detective stories and Two-Fisted Tales-style pulp fiction. It has a strong Film Noir vibe, brought to life by the various artists' dark visuals and period set pieces. The main character has also been heavily altered. Rather than the classic Rich Idiot With No Day Job persona affected by the likes of Bruce Wayne or Lamont Cranston, Dodds comes off as a bit of a short, pudgy-faced, bespectacled geek, more in the style of Dan Dreiberg than anything. Were it not for occasional prophetic dreams he receives unconsciously through an ill-defined connection with the other Sandman, Morpheus, he would be the quintessential Badass Normal, just a guy in an army surplus gas mask with a fancy gun.

Much time is also given to the relationship between Dodds and his Love Interest, Dian Belmont, the daughter of the local DA and eventually his Margo Lane-esque sidekick. Many of the stories are told from her perspective and it could even be argued she's the real main character, not to mention the real Badass Normal.

Sandman Mystery Theatre is a wonderful read for anybody who loves classic pulp fiction, Film Noir, or costumed hero stories that stay towards the more realistic end of the Sliding Scale of Idealism Versus Cynicism. The series lasted for 70 issues, from April, 1993 to January, 1999.

Tropes used in Sandman Mystery Theatre include:
Retrieved from "https://allthetropes.org/w/index.php?title=Sandman_Mystery_Theatre&oldid=1765654"
Categories:
Cookies help us deliver our services. By using our services, you agree to our use of cookies.