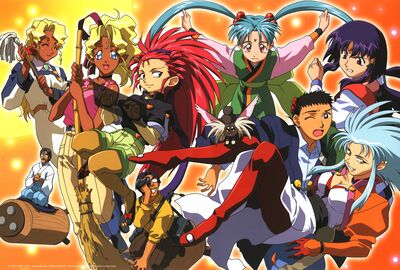 The original continuity of the Tenchi Muyo! franchise, consisting of three six-episode OVA series and two special episodes. The spinoff series Tenchi Muyo! GXP and Isekai no Seikishi Monogatari (AKA Tenchi Muyo! War on Geminar in North America) are both part of this continuity.

The first series, released from 1992-93, was mostly introductions to the major characters, who join Tenchi's Harem via a Debut Queue. Episodes 5 and 6 bring in the first major villain, the space criminal Kagato. The second series, from 1994-1995, includes some major revelations about the characters' pasts and features a new villain, Dr. Clay. The third series, from 2004-2005, focuses more on the characters' families and resolves some lingering issues from the first two parts.

Tropes used in Tenchi Muyo! Ryo-Ohki that are not on the Tenchi Muyo! page (or are averted/subverted) include:

Retrieved from "https://allthetropes.org/w/index.php?title=Tenchi_Muyo!_Ryo-Ohki&oldid=1768267"
Categories:
Cookies help us deliver our services. By using our services, you agree to our use of cookies.