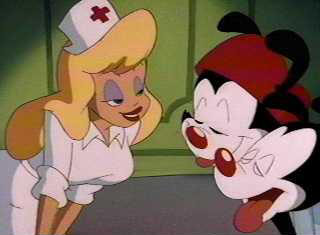 This woman is sex on legs, and everything about her screams Schwiiinnng!. She may or may not know it, but when she walks past, everyone takes leave of their senses and devolves into a steaming mass of drool, totally consumed by Lust.

In a funny cartoon, expect steam to shoot from their ears, their hearts beating so fast you can see them. For other shows, the leads will stutter and sweat; any charm they once had will dissolve in her presence.

She may be a sympathetic character, who is tired of being treated differently because of her appearance. She could be a ball-buster who uses her skills to seduce her way to whatever she wants. She might be smart as a whip or dumb as a post. Either way, she will probably only be a Flat Character. (No, not that way.)

Of course, the only person she wouldn't mind drooling over her will most likely be a Chaste Hero.

The name comes from the Animaniacs character above, who herself was named after a classic Vaudeville gag where an attractive, voluptuous woman in a nurse's uniform would walk across the stage, causing the guys present to call out: "Helloooo, nurse!" This Catch Phrase eventually extended to all the show's attractive women—and, for Dot, men. (Interestingly enough, the nurse's name actually was Hello Nurse.)

Compare with Ms. Fanservice, who's meant to provoke the same reactions in the audience, rather than other characters (there's considerable overlap, though). See Chick Magnet and Even the Guys Want Him for the male version. Make straight females fall for her as hard as the straight boys, and she'll be a case of Even the Girls Want Her.

When she's actually a nurse, it's Hospital Hottie. If she just dresses like one, it's Naughty Nurse Outfit.

Dial this trope Up to Eleven, and you have the World's Most Beautiful Woman. Compare to Eating the Eye Candy.

Examples of Hello, Nurse! include: