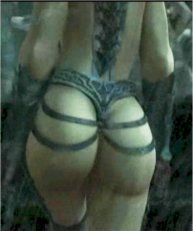 "Wait, just how is that supposed to protect her from back attacks, anyway?"

Nipple-and-Dimed for the backside. Provided that the gluteal cleavage (that's the bit between the buttocks) is covered, you can show a massive amount of rear and get away with it.

Often a feature of the Barely-There Swimwear. Compare Chainmail Bikini, Underwear of Power.

Examples of Thong of Shielding include: