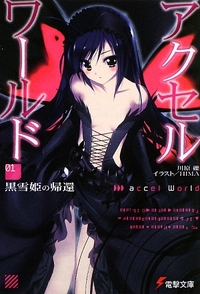 What if you could escape to an accelerated world?

Faced with a Gang of Bullies and a body that is not pretty, Haruyuki often retreats from reality into a Cyberspace world maintained by his school. He loses himself in a virtual squash game that no one else plays and holds all of its high scores. One day, he visits the game only to find that his high scores were not only beaten, but beaten by a considerable amount!

This is how the Student Council Vice-President and School Idol Kuroyuki-hime (which translates as "Snow Black Princess") contacts him and offers to show him how to “accelerate to a faster world.” This Brain Burst program, downloaded directly to a neuro-link attached to the bottom of the skull, allows a person to make time appear to stand still by "accelerating" their brainwaves; this can often be used as Hyper Awareness, letting its users make decisions and strategies that would take minutes in seconds. Unfortunately, there is a limit to how many times a person can accelerate. People with the Brain Burst program take the Burst Points needed for this acceleration from others by winning in a Fighting Game. The only way to avoid being challenged to one of these fights is to not be connected to the same network which, in a world where always being connected to some network is the norm, requires being very careful and a lot of willpower.

Once in the game, Haruyuki becomes Silver Crow and, as thanks for bringing him into this world, decides to use his abilities to complete Snow Black's goal: reach Level 10 of the Brain Burst game and discover its purpose. Unfortunately for him, this requires beating the current leaders of the game: six Level 9 players who have led the world for over two years and will do anything to win because one loss at Level 9 means Brain Burst will permanently uninstall itself.

A Light Novel series from the pen of Kawahara Reki (the mind behind Sword Art Online) and Aigamo Hiroyuki, published by ASCII Media Works and serialized in Dengeki Bunko starting in 2009. It's had two manga adaptations, the first being the source for most of the examples below, and the second a Yonkoma. Needs More Love.

An anime adaptation started in the Spring 2012 Anime, and has been licensed for streaming by Viz (which is sadly locked to Americans due to their use of Hulu).

Also has a Character Page under heavy construction here.

Tropes used in Accel World include:
Retrieved from "https://allthetropes.org/w/index.php?title=Accel_World&oldid=1678442"
Categories: