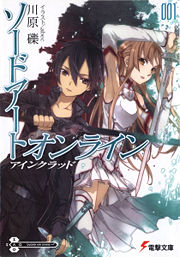 Imagine that gaming had advanced to the point where you no longer watched from the other side of a television screen, but you were right there in the world, with full immersion and body control.

Now imagine that someone had the brilliant idea to create an MMORPG using the brand-new technology. The problem is... you can't log out.

It turns out, the game's creator has issued an ultimatum: Reach the top of a certain castle (all 100 floors of it), beat the Final Boss, and you will be able to log out. However, if you die in game, you die in the real world. The same thing will happen if you force the system to shut off.

Kirito, an experienced, but reserved beta-tester, has fallen into this situation. Now, he and every other player in the game must do their best to survive this ordeal.

Spawned a web Voice drama (found here), a highly popular anime adaptation by A-1 Pictures and a manga series written by the author, but drawn by different artists.

Video games were also made, from an Alternate Continuity:

Retrieved from "https://allthetropes.org/w/index.php?title=Sword_Art_Online&oldid=1831532"
Categories:
Cookies help us deliver our services. By using our services, you agree to our use of cookies.