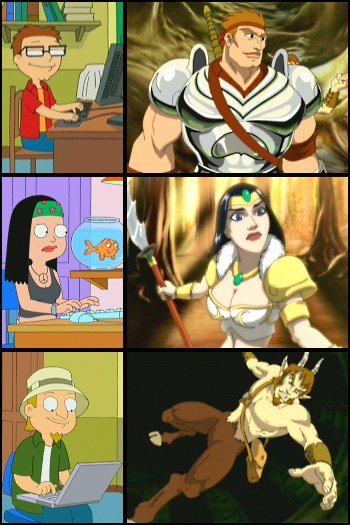 So deep, it's not even drawn by the same studio.

Any discussion the players have will be seen taking place between the characters. The characters will nearly always facially resemble the players, although they will often be altered to take on aspects of the player characters. This can be done with the intention of looking silly, such as the 7-foot-tall barbarian wearing his geeky player's signature Nerd Glasses or a male player shown crossdressing as his female character. A different art style may be used to show the gameworld; video game worlds may have something of a pixellated or cel-shaded appearance.

This is similar to a Dream Sequence, some display of how "immersed" the characters are in the game; it's their imaginative perception of what's going on. This allows us to see events in-game, and is a lot more interesting than watching two guys tapping on their controllers.

(Not to be confused with "immersion gaming," a form of live-action roleplay that lasts for more than 24 hours, takes place in and interacts with the real world, or both.)

Examples of Deep-Immersion Gaming include:

Narrator: And so did the group describe themselves walking, and so did Abed confirm they walked.