Oh... looks like your glasses are sliding down your nose. You'd better correct them—But wait! Don't reach for those frames just yet. How you adjust your glasses speaks volumes of your character - at least if you're a fictional one. Here, we've provided a helpful list of the myriad ways to correct your spectacles, from which you can pick the one that suits you the best. 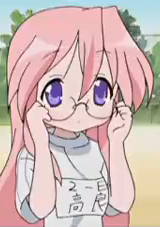 Adjusting your glasses by their arms, using both hands, conveys that you're either not used to wearing eyeglasses, or taking exceptional care with them. In any case, it is Moe, and as such usually the province of the Meganekko. The one-handed variant, however, has come to be known as a somewhat sly gesture, but more softspoken Megane have been known to utilize it without mischievous intent. 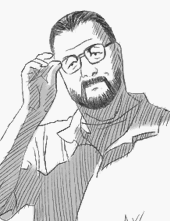 Holding one lens or hinge between the thumb and the forefinger is almost singularly reserved for The Professor types. Nerd Glasses and Purely Aesthetic Glasses are—almost by definition—adjusted this way. This is also the only way to adjust your High-Class Glass, but we can't say if there's a deeper meaning to the connection.

Adjusting your glasses by both lenses is only reserved for the highest echelons of geekdom, and those who wear goggles. (Sometimes these two groups overlap.) 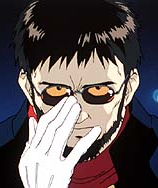 Pushing your glasses back up your nose by their bridge, using one or two fingers, has more conflicting interpretations. In the West, this gesture is generally associated with Nerd Glasses and the socially inept, but in the realm of Anime and Manga, doing this usually means that you're a Badass Bookworm. Pushing your glasses up the nose is also known to trigger a staggering majority of Scary Shiny Glasses.

In more juvenile comedies, this is also a way of Flipping the Bird without technically doing so, intentional or otherwise.

After what we've covered thus far, the gestures that remain tend to be so alien as to be relegated to some singular character's idiosyncrasies. Look through these examples for some truly exotic ways to adjust your glasses.

As you can see, adjusting your glasses can be such a powerful characterization tool that you shouldn't reserve doing it only for when your glasses actually need adjusting. If you're wearing Stoic Spectacles or are just painfully shy, you can always just adjust your glasses in lieu of a proper greeting. If you want to underline the seriousness of the situation, adjust your glasses - Glasses Pull used to be popular for this, but nowadays it's a largely Discredited Trope. Don't know how to express your feelings? Adjust your glasses. It's an act with uses above and beyond just correcting your corrective lenses.

Examples of Adjusting Your Glasses include:

Retrieved from "https://allthetropes.org/w/index.php?title=Adjusting_Your_Glasses&oldid=1936567"
Categories:
Hidden category:
Cookies help us deliver our services. By using our services, you agree to our use of cookies.